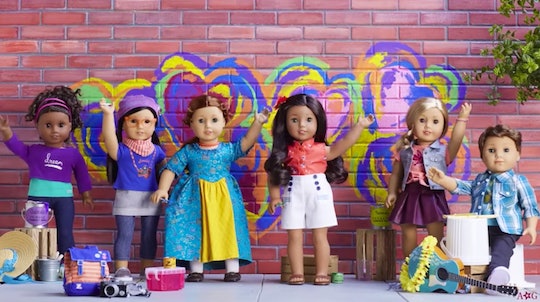 How Much Will The American Girl Boy Doll Cost?

For many who grew up in the 1990s and early 2000s, American Girl dolls were the toy always at the top of our birthday and holiday wish lists. Over the years, the company expanded beyond its original historical bent to include an increasingly diversified range of dolls — but they've always been girls. Now, American Girl has announced that it intends to change that. How much will the American Girl boy doll cost? The newest addition will arrive this year.

When the American Girl doll franchise began, it was mostly focused on dolls who had a historical story to tell: Felicity, now permanently retired, taught us about the American Revolution, Addy introduced many kids to the realities of America's racism and the concept of slavery, and Molly was growing up during WWII — as many of our grandparents had. The company added a few new historical dolls over the years, but their big success was the addition of dolls that you could customize to look like you. At first the diversity left a lot to be desired, but over the years American Girl refined the selection and many kids found that they had a pretty decent look-a-like doll.

The dolls also have always had an increasingly wide range of outfits and accessories, which ran the gamut from hobbies to pets, and in more recent years, even doll-sized wheelchairs and other medical equipment familiar to children with disabilities.

American Girl has its flagship store in New York City — The American Girl Place — which became something of a mecca for young doll owners. A series of books and movies rounded out the franchise, and now American Girl is one of the most recognizable brands in our culture.

Calls to diversify the American Girl doll brand have not gone unheard from the company, and its latest announcement is a direct response to consumers wanting to see a more diverse experience represented. As part of its 2017 doll lineup, American Girl will be rolling out its first-ever male doll.

The doll's character is a boy named Logan Everett, a musician and friend of another new doll, Tenney. The bandmates live in modern-day Nashville, Tennessee, and will be debuted along with musically-themed books and, by the looks of it, an American Girl movie as well. Logan's hands will have "extra joints to hold his beloved drum sticks," and his official release is on Feb. 16.

Tenney and Logan will likely cost just the same as the other dolls, which currently retail for about $115 a piece. Of course, many opt to throw in accessories, books, and additional outfits, which are sold separately. In addition to Logan, other new dolls set to be released in 2017 are: Tenney, a rising Nashville country music star, Nanea, "a Hawaiian girl who does her part to help and heal during wartime," and 2017's Girl of the Year doll, Gabriela — a dancer, artist, and performer who uses the arts to gain confidence and overcome her stutter.