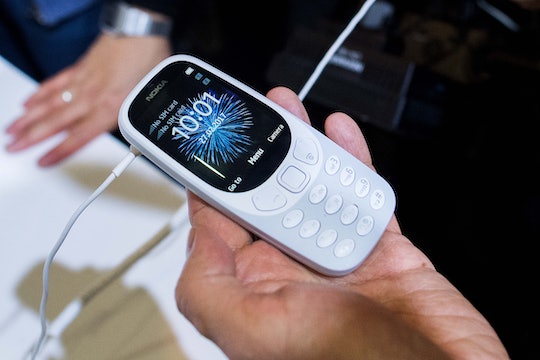 How Much Will The Throwback Nokia 3310 Cost?

My first cell phone was a Nokia. I have no idea what model number it was, because unlike many 14-year-olds, when I received my first cell phone from my dad, I was uninterested. I never made a single phone call from that phone, nor a text; I also never gave the number out to anyone. Truthfully, I never even memorized it. But even I got nostalgic when Nokia announced it was relaunching its classic Nokia 3310 phone model. So for those of you who are curious, or may actually want to buy this throwback phone, how much will the Nokia 3310 cost?

The Nokia 3310 costs 49 Euros, which is a little more than $50. The phone comes with a basic camera, can be used with headphones, and has support for 2.5G mobile networks — which is slow by modern 4G standards. The phone will come in black, grey, yellow, and red, and will be available sometime between April and June, Tech Radar reported. And yes, you can play Snake.

In a world where millions upon millions of apps exist, not everyone cares about being able to watch cute cat videos or browse Instagram, and you won't be able to do either easily since the phone doesn't come with apps nor can they be installed, Gizmodo reported.

But for some who are, well, technologically unskilled, smartphones are just too much of a pain to deal with. "They're hard to text with," my dad complained, noting he likes the physical keyboard of Blackberry-era phones.

Jason Hong, an associate professor of computer science at Carnegie Mellon University, told Romper the phone is "a good idea for people who find modern smartphones too complex." He added: "There are lots of people who only want to use their phone for a few basic things, like talking with others or an alarm clock."

Having basic phones is important, because when Pew Research reported that 91 percent of Americans have a cell phone, people look right past the fact that that means that almost 10 percent of the population doesn't. Keeping simpler phones on the market may be the best way to reach these people.

Still, Hong believes the phone will be a tough sell.

[I think] the Nokia 3310 will sell okay but not spectacularly well. Around 60 percent of people in the US already have some kind of smartphone, and the switching costs for them would be pretty high, in terms of apps, music, email, and so on.

But that doesn't mean the 3310 won't appeal to certain crowds: one of it's greatest strengths is its long battery life (NPR noted it's known as the "Chuck Norris" of phones, and Nokia noted the phone can stay charged for up to a month). Even for those who can't live without a smartphone, the 3310 makes a great back-up.

But truthfully, I think at least some of the appeal of this throwback phone is nostalgia. This phone is a reminder of a simpler time; it makes me think of when I was 12 or 13 years old, hanging around outside of my middle school, chatting with friends who would pull out their phones after classes ended. It makes me think of the spice shop up the block from my school that has since closed, where we'd get bowls of handmade mac and cheese for $1.

In a fraught political and social climate, current music has turned back time, evoking the '80s and '90s; fully embracing these periods without fear of ridicule. So I guess it makes sense our phones have as well.