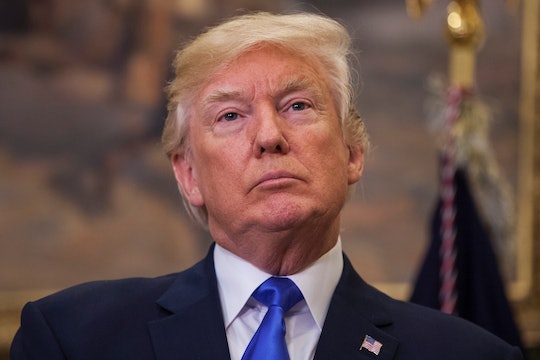 President Donald Trump has often criticized former President Barack Obama for taking time away from his duties for vacations and golf trips, and in 2015, while running for office, Trump vowed "he would not be a president who took vacations," and that "he would rarely leave the White House because there's so much work to be done." That likely sounded great to his supporters, but according to CNN, Trump is actually set to depart Friday for a 17-day vacation at his golf course in Bedminster, New Jersey. How much will Trump's vacation cost taxpayers? The exact amount isn't known, but for someone who has claimed to not take time off, he's already racked up an awful lot of travel time.

According to The New York Times, Trump's New Jersey getaway will technically be "his first extended vacation from Washington" as president, and Trump's White House spokesperson claimed that the president was only leaving due to HVAC system repairs at the West Wing, and that Trump will be continuing to work while he's away. It certainly won't be the first time, though, that the president has taken time away from the White House: according to The Washington Post, Trump has made 11 visits to his properties in Palm Beach, Florida, and New Jersey since taking office, as well as a weekend at Camp David in June. And of the 28 weekends he's spent in office, Trump has spent 13 of them away from the White House, according to The New York Times.

Earlier this year, former White House Press Secretary Sean Spicer said that Trump's visits to his Mar-a-Lago resort in Palm Beach are "where he goes to see his family," and that they should be considered "part of being president," according to NBC News. But they also come at a high cost to taxpayers: according to Fortune, the Air Force One flight alone costs roughly $200,000 an hour, and when he arrives, the city is required to cover the cost involved with providing adequate security. In Bedminister, that totals approximately $12,000 per day, while in Palm Beach the amount is closer to $60,000 per day. Yet the fact that the president chooses to stay at his own private resorts may have created an additional financial benefit for the Trump family: according to NBC News, the membership rates at Trump-owned Mar-a-Lago doubled after Trump took office, and now costs new members $200,000.

To be clear, there's nothing inherently wrong with the POTUS taking a vacation, and given the importance of the job, taking time off seems healthy and necessary. But given how often Trump criticized former presidents for taking time off, it seems particularly hypocritical.

In addition to his 2015 comment about never leaving the White House or taking vacations, in August 2016, he told voters that he'd be so busy working for them as president that he "wouldn't have time to play golf," according to CNN. And back in 2012, Trump tweeted a line from his own book, Think Like A Billionaire, in which he wrote, "Don't take vacations. What's the point? If you're not enjoying your work, you're in the wrong job." And he's also shared numerous tweets in which he called out Obama for his own vacations, suggesting that they got in the way of his ability to do his job.

In October 2014, for example, Trump wrote "with all of the problems and difficulties facing the U.S., President Obama spent the day playing golf," and added that he was "Worse than Carter." In Aug. 2011, Trump grilled Obama for taking "a 10 day vacation in Martha's Vineyard," and threw in a sarcastic shot at his "nice work ethic." And in 2012, Trump made multiple references to the cost involved with the Obamas travel: in January, he wrote, "President @BarackObama's vacation is costing taxpayers millions of dollars — Unbelievable!" and in April, he tweeted, "The [Obamas'] Spain vacation cost taxpayers over $476K ... They love to spend money."

But according to The Washington Post, by the end of the month Trump will have already clocked far more leisure days than Obama did in his first eight months, with 53 days to Obama's 15. And despite his disdain for Obama's golf playing, The Washington Post estimated that Trump has already played nearly twice the amount of golf as his predecessor. What's more is that in April, CNN reported that Trump was already on pace to spend more on travel in his first year in office than Obama did in eight years.

The difficulty in figuring out exactly how much each of Trump's trips cost though is that his travel expenses aren't required to be publicly disclosed, according to NBC News, though according to The Independent, an estimate from the Center for American Progress puts the current figure at about $30 million. Now that Trump has shifted his destination to Bedminster, the costs will be at least somewhat reduced (as a waterfront property, Mar-a-Lago needs to be protected both by air and sea), but make no mistake — they'll still be staggering.

It's not entirely surprising that presidential travel is extremely expensive, and technically, Trump doesn't have much control over things like the cost of security or flying the plane. But perspective is important here: Trump announced last month, for example, that he would be banning transgender individuals from serving in the military because of "the tremendous medical costs." But according to GQ, that cost is specifically estimated to be between $2.4 and $8.4 million a year — an amount roughly equal to the cost of sending Trump to Mar-a-Lago about, oh, four times.

The fact that Trump is taking time off in the summer isn't a huge deal in and of itself, but the he's made such a point of boasting about how hard he'd be working and how he'd never take vacation that it's also kind of infuriating. What's worse though by far is knowing that, actually, he's already cost taxpayers a significant amount of money in travel costs — money that clearly could have just as easily gone to pay for something that actually makes a difference.