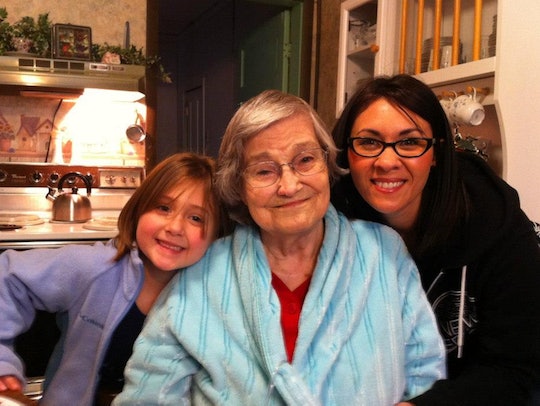 My Grandmother Was My First Feminist Hero

My Gram — who was strength, courage, and resilience personified — was way ahead of her time. When I was a little girl, wide-eyed and brimming with insecurities about my identity I couldn't yet comprehend, I didn't realize the impact she'd have on the future version of me — a version who's confident, self-assured, and cemented in the beliefs I now know are the direct result of lessons learned from my feminist grandmother. Back then, I admired this woman for obvious reasons — her ability to persevere, above all — but now that I'm married with two children of my own — one who's pre-pubescent, complete with her own set of insecurities — I see so much of Gram's low-key feminist lessons in the way I parent which, to be honest, is amazing.

In today's volatile, frustrating, and sometimes dire political and socioeconomic climates, my children come to me with new stressors nearly every day. In our small, conservative town, they don't yet know how to navigate their space on this planet and while I try, I'm still figuring things out too. During periods of uncertainty throughout my life, I'd turn to the woman with all the answers: my Gram. A treasure trove of hope and belief that no matter how hard a day feels, the sun will set and rise again, she was my go-to when the world felt a little too heavy.

Now that she's gone and I have two kids in need of the same security I craved at their age, I find myself stuck in a loop of memories, trying to conjure up every last bit, as if scraping the corners of my brain might loosen some of the best lessons she taught me. When I look at my kids, my daughter mostly, I'm reminded of Gram's monumental influence and how I hope to mirror the essence of her in some affecting way. Because in the end, my legacy will be most abundant through the people my children become, the same way I hope to reflect the best of Gram's legacy through my actions and beliefs.

Born in the cold, desolate winter of 1928, my grandmother was no stranger to hardship. She endured childhood in the deep south with her sisters and brothers during the Great Depression. Dirt poor, struggling to eat, not a single one of them ever lost their sense of humor or desire to make better lives for themselves. She fell in love young and married at 17 to a man she'd spend decades of her life with. After he died, she never loved another, and we buried her with that gold band, a symbol of their love.

In memory, my Gram made me feel supported. I've made it my mission to make every other woman feel the same.

Before my grandfather left with the Navy, my Gram was pregnant. She spent those lonely, love-sick days in the cotton fields until they discovered she had tuberculosis and was sent to a sanatorium. At a time she should've been able to celebrate the life growing inside of her, she was forced to abort the baby for the sake of her health. I think of this now, in my adult years, after enduring two miscarriages, fertility problems, and pregnancies that nearly killed both my son and me. In Gram's day, women's health, abortion, and the right to choose were unheard of. But had she carried to term, the doctors who treated her say she'd have died.

Eventually, when my grandfather was home from the service, she got pregnant again, suffering more loss through miscarriage, before delivering my mom and aunt, 10 years apart. Motherhood, by this point, had escaped her, as she was older, more restless, and self-medicating lingering postpartum depression (PPD) and anxiety she'd endured long after her sanatorium discharge. The depression consumed her; ate away at the root of who she once was until one day, she'd attempt to take her life and, thankfully, failed.

Having suffered through PPD after the birth of my daughter in 2006, knowing a woman I looked up to also felt the same was unusually comforting. Her powerful openness about her battles with mental health served to squash the vulnerability and shame I felt. Through her, I learned how to advocate for myself and others. I sought the help of therapies, medications, and techniques I otherwise might not have had the courage to try — self-care practices I still lean on decades later. I write openly about my experiences, raise money, and work to champion awareness for others going through difficult times with organizations like To Write Love On Her Arms, and the American Foundation for Suicide Prevention. In memory, my Gram made me feel supported. I've made it my mission to make every other woman feel the same.

I remember wanting to be just like her, creating little crafts I'd sell as a young and hungry entrepreneur. She always invested in me, believed in me, and I attribute my passion for my career to those days when she didn't hesitate to buy into my dreams.

Years later, after she decided there was more to life than motherhood, Gram took a job in factory at a time in history when women assumed the traditional and outdated role of staying home with the children. In a male-dominated society, she bucked traditional norms to earn her own money. I remember wanting to be just like her, creating little crafts I'd sell as a young and hungry entrepreneur. She always invested in me, believed in me, and I attribute my passion for my career to those days when she didn't hesitate to buy into my dreams.

Gram and I never had one direct conversation about what it meant to be a feminist, but we didn't need one. She showed me, rather than explained. When my parents' divorced after a bitter marriage that left my younger brother and I vulnerable to a slew of difficult, traumatizing emotions — which included discovering that my brother and I had different fathers — Gram bridged the gap between who I thought I was and my new reality with love, compassion, understanding. Without her, there'd be no me. When my foundation was ripped from beneath me, Gram provided a secondary home when I felt unwelcome elsewhere, often reminding me that all that made me so different made me that much more special. She avidly, hopelessly, endlessly advocated for me, even when it meant she'd have to take on the bulk of that responsibility while my parents figured out their own ways. None of it was easy, I'm sure, but with her, I always belonged. She remains my one safe place, even in death.

When I was young, she took me to voting polls where she proudly displayed her "I voted" sticker. When she learned of my childhood personal traumas, she reminded me of all the ways my body was (and is) my own. When I endured my first real heartbreak, she held me, told me I was strong enough without the love of a man. When I got my first real job out of high school, she took me shopping for clothes to make me feel the professional she always saw me as. When I got married, she assured me independence is a strength, not a weakness. And as I grieved over the loss of my babies, she grieved with me, opening the book of her life so that I could see just how strong women like us are.

With the (vicious) election cycle at a close and issues such as defunding of Planned Parenthood, the attack on personal freedoms in accordance with religion (the proposed unconstitutional "Muslin Ban"), and the rights at stake when it comes to gender/sexuality (the LGBTQ community in particular) in America, Gram's been on my mind more than usual lately. She accepted people at face value without judgment, discrimination, or exclusivity, and as the product of biological interracial parents, she fought for equal rights for all. She's shown me throughout her life how to truly "be the change you wish to see in the world."

As my daughter looks up to me with pressing questions about our president's off-putting bills and tactics and growing concerns over the great divide in our country, I feel a tug in my heart; Gram is once again conducting somewhere out there. The grand maestro of my whole existence, I imagine her pulling thoughts fresh from my memory so that I can pass on those stories, experiences, and triumphs to my impressionable daughter, a fearless young woman who wear a black t-shirt that says "president" on the front.

As I'm still grieving the 2015 passing of my lifelong hero, I lean into the resolve she somehow instilled in me when I wasn't paying attention. Because of her, I aim to do the very same with both my kids. Equality, compassion, and the scope for which we view the world begins at home. My Gram taught me that.