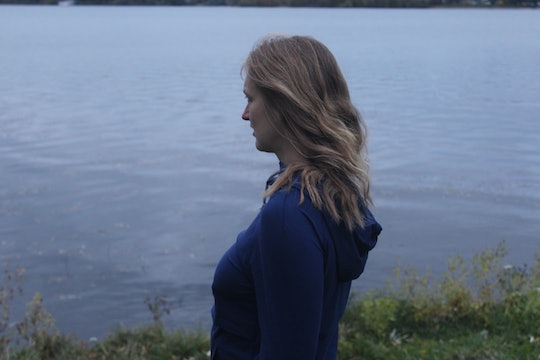 I’ve never been in a position where I have needed an abortion. I have, however, had a miscarriage in the first trimester of a very wanted first pregnancy, and while the experience was completely and utterly devastating, having a miscarriage only strengthened my belief in the right to abortion. An unexpected pregnancy loss is often used to demonize people who terminate their pregnancies, but mine made the need to support the full spectrum of reproductive rights and justice — including decriminalized, safe and accessible abortion services — all the more obvious to me.

My miscarriage started as many miscarriages do — with a little bit of blood. By the next morning, there was a little more blood. By the time I was waiting at the hospital, I was hemorrhaging, with gushes of blood following painful contractions. After an ultrasound, an emergency room doctor told me my uterus was “empty” and I must have already passed any fetal tissue. He told me that the bleeding would subside in two or three days, then sent me home.

Devastated, my partner and I spent the next couple of days trying to adjust to our new reality: That the family we had been imagining for the last two and a half months was not to be. We reached out to friends and family members, and while all offered their condolences, no one really knew how to talk about what had happened or how to offer support.

When the bleeding continued for more than the few days the doctor had promised, I grew concerned. Because I was no longer expecting, I wasn’t a priority for the local midwifery clinic, who told me to go to my family doctor (I didn’t have one) and that, again, the bleeding wasn’t anything to worry about. They also pointed out that, because of my negative blood type, I should have received a RhoGAM shot within 72 hours of the miscarriage beginning. The shot prevents Rh incompatibility, which occurs when Rh negative blood is exposed to RH positive blood, something that could have occurred if the fetus was Rh positive. I hadn’t received the shot and this news sent me into an emotional tailspin, as Rh incompatibility could mean my immune system would treat any future fetus as a threat, causing serious problems with future pregnancies. Most of my friends had a hard time understanding exactly what I was going through, and I experienced ever deeper confusion, isolation, and alienation from my body.

After three weeks, I woke up one morning with excruciating pain and more blood. Alarmed, I went to the emergency room. The doctor seemed as confused as I was by what was happening, but a vaginal exam quickly revealed that my uterus was not “empty,” as the original doctor had claimed. The fetal sac was stuck in my cervix, and I was in danger of an infection. The doctor grabbed forceps and told me to push, removing the tissue into a bucket which a nurse hastily disposed of. She sent me for blood work and an ultrasound to ensure that my uterus was now clear of any tissue (Spoiler: It wasn’t).

All in all, the physical process of miscarrying lasted almost six weeks. My emotional recovery, however, took many months longer.

I know that everyone experiences miscarriage differently. For my part, my miscarriage was the loss of a hope and dream; of an imagined future of parenthood and family. It was also the loss of a sense of control over my body, an illusion which, as a young, healthy and privileged person, I’d always clung tightly to.

Throughout my pregnancy loss, I was also shocked to discover how badly society and healthcare practitioners treat a miscarriage and those experiencing it, especially given its prevalence. While going through this terrible process, I thought a great deal about how women aren’t adequately supported through the termination of a pregnancy, whether it be a spontaneous abortion ( i.e. miscarriage), a surgical abortion, or a medication abortion. Statistics suggest that approximately one quarter of pregnancies will end in miscarriage, and, in the United States, 18% will end in abortion, according to the Guttmacher Institute. This means that many women and pregnant people will experience loss, and while these experiences undoubtedly differ in many respects, they are often experiences marked by feelings of stigma, shame, and lack of support. Miscarriage and medication abortions can both be physically similar to experiences of labor and birth, but rather than being prepped by childbirth classes and supported by doulas, midwives and doctors, most people going through this are expected to endure the process at home and alone.

As we work to fight against continued efforts to limit abortion access, I’m also pushed to imagine how we could better support the diverse and varied experiences of all pregnant people and their families on physical, practical, and emotional levels.

My own miscarriage experience also drove home what the reality of the dangerous abortions procured by women during the days abortions were illegal must have looked like. I thought of the harrowing stories of back-alley abortion providers, of hemorrhage, of infection, and, in the worst cases, of death. I thought of how terrified and confused I was by the amount of pain I experienced and the blood I lost, and how woefully inadequate I found the responses of healthcare providers. But I imagined how much worse it would have been if I had no one to turn to for help. I imagined how I would feel if, during the scariest and most difficult moments, I had to shamefully hide my situation from loved ones or trained health-care professionals for fear of being criminalized.

While I’d like to think that, in a post-Roe v. Wade era, unsafe abortions are a thing of the past, an array of conditions — a lack of providers, the high cost of the procedure, lack of insurance coverage, and a complicated patchwork of regulations across states — mean that many people in the United States still lack access to safe, legal abortions. This past spring, five states attempted to implement bans on abortion after the detection of fetal heartbeat — at six to eight weeks gestation — before many people know they are pregnant. Alabama passed a bill, set to take effect this November, banning abortion in nearly all cases.

And we all know the story — in cases where abortion is illegal or severely restricted, pregnant people who need abortions will suffer. History has shown that those who need abortions will always need abortions, and that criminalizing abortion does little other than make it less safe for the people involved. Those accessing illegal self managed abortions can face jail time or worse, as in Georgia in 2015, where Kenlissia Jones faced murder charges and the death penalty after taking an abortion pill she had accessed online (the charges were later dropped). In other countries, such as Honduras, laws prohibiting elective abortions have been used to charge women who swore they miscarried. We also know that provisions allowing for abortion in cases where a person’s life or health is at risk are woefully inadequate. In Ireland, Savita Halappanavar died of E. coli and severe sepsis after she was refused an abortion because a fetal heartbeat was still present, despite the fact that doctors expected she would eventually miscarry. This happened in 2012. (Halappanavar’s death prompted renewed debate around Ireland’s restrictive abortion law, resulting in its repeal in 2018).

Pregnancy, even when wanted, carries risk and difficulty. At the best of times, pregnant people experience nausea, hormonal mood swings, and a host of bodily changes. Being pregnant can strain relationships, hurt careers, and cause mental and emotional distress. Labor and birth are notoriously painful and exhausting experiences. Having a baby — and the accompanying sleepless nights, demands for feeding, and total overhaul of lifestyle — can be challenging, even for those who desperately want and deeply love their children.

These experiences are worth it when the child is wanted and families have the support they need. But for many people — those who don’t want relationships with the people who got them pregnant, who struggle financially, who lack the support needed to parent successfully, who already have children and know the challenges involved with having more (according to the Guttmacher Institute, 59% of those accessing abortions are already parents), or who simply don’t see children as fitting into their lives — attempting to force them to endure these hardships for some abstract and very black and white idea of what constitutes life is simply cruel.

Going through my miscarriage drove home the fact that while birth is celebrated and theoretically supported in our culture — at least for white, middle class families — support for those experiencing other pregnancy outcomes is woefully inadequate, even in places with relatively progressive laws. Although I had access to basic health care services during my miscarriage, overall I experienced a lack of information and support throughout the entire process. This experience has held doubly true for the friends accessing abortion services; friends who have been forced to navigate a maze of bureaucracy just to find a provider; who have been sent home with the abortion pill without any preparation for what they were about to experience; who have had to travel and struggle to pay for the procedure (as well as lodging, child care, and transportation costs); who have had to hide their experience from friends, family and coworkers. If my experience was traumatic and difficult, theirs was even more so.

I suspect that part of the reason that there is so much silence around miscarriage in our culture is that those advocating for women’s health have been afraid that focusing on the difficulty of miscarriage might undermine efforts to protect access to abortion. But rather than see these as contradictory efforts, I think it makes more sense to frame both as important events in women and pregnant people’s reproductive lives. As we work to fight against continued efforts to limit abortion access, I’m also pushed to imagine how we could better support the diverse and varied experiences of all pregnant people and their families on physical, practical, and emotional levels. We can acknowledge that those experiencing the termination of a pregnancy, whether chosen or otherwise, might experience a difficult spectrum of emotions and experiences without condemning abortion.

We can also advocate for stronger maternity leave policies, access to childcare, and people-centered healthcare systems that would better serve all of us, while also leaving people the room to make genuine choices about their reproductive lives.

Jane Kirby is writer, performer, and (since this article was originally written) new mom. She is the author of the book Fired Up About Reproductive Rights, has a Master’s in International Development Studies, and works in international development research.