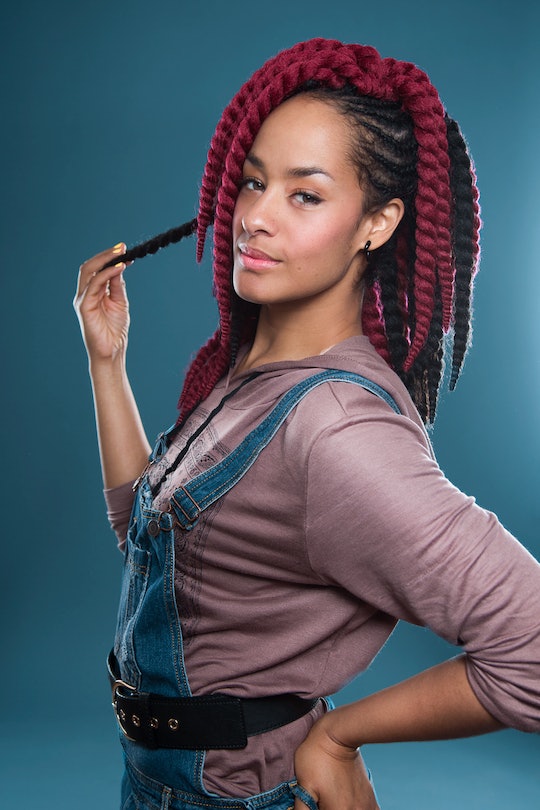 My kid is reaching a hormonal stage. She’s been developing in ways I was warned about. Like being moody toward me and wearing the size-two jeans I could fit in before I had her. So mean.

The other day I was doing big city laundry. That entails leaving my mediocre one-bedroom apartment (that is the same monthly rent as a mortgage on a three bedroom in a less fun city) to do laundry in a separate building from the one I’m “living my dreams” in. In downtown Jersey City, there’s not enough room for dreams and a washer/dryer unit. So I was looking for something to wear when I realized all my bras were dirty. Picture me laughing to myself when I picked up one of my 11-year-old’s clean training bras, intending to jokingly try it on. She has more bras than me because I overdo just about everything for her out of single mother guilt.

So, close your eyes and imagine me picking up one of her tiny flat bras made out of the amount of cloth needed for a small dog’s sweater. A really tiny Chihuahua mix. One of those dogs that they tell you is a teacup, but there’s no such thing. In reality, teacups are just sickly runts of the litter. So now when there’s a flurry of snow you have to go to the pet store and buy it a sweater just so it doesn’t die before your 4-year-old child develops a lasting memory of having a furry sibling, because you ain’t having no more babies. But I digress.

I breastfed my baby on one tiny boob for nine months until I went back to work and it dried up between pumps. The other boob had already tapped out around the third week. It was smart.

So with no other way to hide my nasty lady nips from the innocent gentleman strangers at the laundromat, I tried on one of my kid’s bras. AND IT FIT. Yes, one of those four-for-$5 bras on a plastic hanger in the corner of the little girl’s section of a JCPenney’s fit me. So sad.

I’m not going to spoil The Handmaid's Tale for you, but remember how Emily reacted when she did the thing to the aunt? Laughing with joy and absurdity, and then being crushed by reality? That’s what happened to me.

I’m over it now because I have what we call perspective. And The Handmaid's Tale. And anti-anxiety meds. I’m embracing my small boobs. Mrs. Waterford tried to breastfeed her baby hostage and her HUGE boobs were USELESS. HA! I breastfed my baby on one tiny boob for nine months until I went back to work and it dried up between pumps. The other boob had already tapped out around the third week. It was smart. It stayed a normal size, while the hardworking boob lost something. I think its soul. Its boob soul. I have one motherly boob and one very selfish, independent boob that’s doing its own thing. Or it was probably the tumor. Yeah, that was it. That’s why it didn’t produce milk. Brave.

Anyways. My daughter is going to grow out of her training bras soon and I’ll have her hand-me-downs to look forward to. Most moms don’t even get a “thank you.”