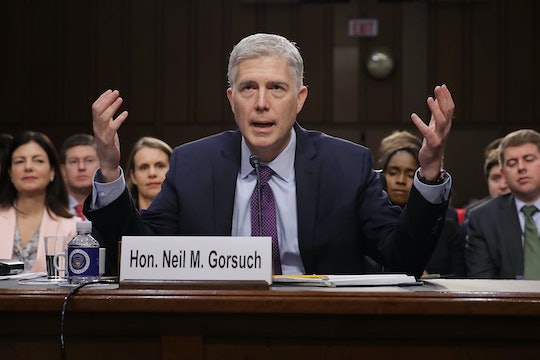 In the midst of headlines surrounding President Donald Trump's proposed budget, the highly-criticized "Trumpcare," and a swell of other divisive legislation, it's likely been pretty difficult to keep track of everything going on in the country right now. But, it's still important to try. With the Senate holding hearings for Trump's Supreme Court nominee, Neil Gorsuch, for example, keeping abreast of any new developments and understanding his background matters — especially if Gorsuch is confirmed. Why? Because Neil Gorsuch's birth control stance could hurt families, and, in fact, it already has.

Back in 2013, Gorsuch oversaw the infamous Hobby Lobby Stores, Inc. v. Sebelius case during his time serving on the U.S. Court of Appeals for the 10th Circuit. His ruling, which is still cited as highly controversial, was that Hobby Lobby maintains the right to deny their employees health care that includes contraceptives, based on religion. And now, as Gorsuch is being questioned and considered for one of the nation's highest positions of power, his four year old ruling preserves its significance. With a Republican-controlled Congress and White House, Gorsuch being confirmed to the Supreme Court would ensure a conservative-ruled nation, and with that, probable limited access to birth control.

In the Hobby Lobby case, the company was seeking exemption from a specific Affordable Care Act mandate that said they had to provide their employees with coverage including four kinds of "abortifacients (contraceptions that abort fetuses), which they said violates their faith and their right to free religious exercise."

Gorsuch's ruling, that Hobby Lobby, and the family who owns the company, the Greens, maintained the right to deny birth control in their company health insurance, carries with it many potential problems for women and families today:

No doubt, the Greens’ religious convictions are contestable, some may even find the Greens’ beliefs offensive. But no one disputes that they are sincerely held religious beliefs … and to know this much is to know the terms of the Religious Freedom Restoration Act apply.

Gorsuch's ruling in the Hobby Lobby case sets a dangerous precedent and is undoubtedly detrimental to all women, including those who already have children and families, but are looking to maintain that balance they already have. With Republicans in control of so much of American politics, and funding for Planned Parenthood currently in danger, another conservative on the Supreme Court could mean even more restricted access to birth control, and health care, for women and families in the United States.