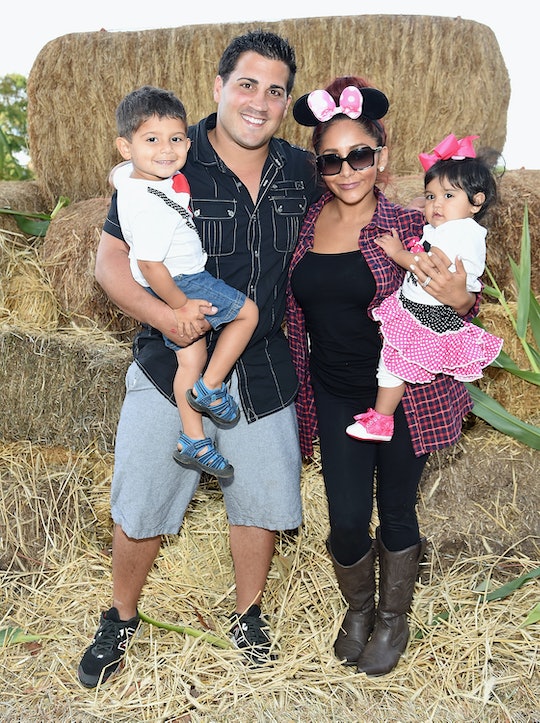 Jersey Shore alum Snooki is currently expecting her third little meatball, and she's made no secret about the fact that she's totally thrilled to be welcoming another baby boy into her brood. But on Thursday, Us Weekly shared how Nicole "Snooki" Polizzi's husband responded to her third pregnancy, and if you've got more than two kids, it's probably a response you'll be able to relate to. Because even though Jionni LaValle is a proud papa who was totally on board to grow their family, Snooki told the mag, "It's the third kid. He was like, 'Oh, sh*it. Here we go.'"

Don't let LaValle's nonchalant response fool you though — Snooki's hubby was just as impatient about getting pregnant again as she was. The reality star told Us Weekly that LaValle had "been waiting for [her] to get pregnant," and it sounds like she definitely wasn't exaggerating.

In March 2016, Polizzi told E! News that her husband "wants to have [another baby] right now," and while it they may not necessarily have both been set on the idea back then, it did take them longer than expected to get pregnant the third time around. In October 2018, Snooki told Us Weekly, "We’ve actually been trying for two months now and it’s not happening. So I’m just gonna relax. If it happens, it happens."

Their struggle to get pregnant was something the Jersey Shore star also addressed in a YouTube video in November, when she opened up about learning she was expecting again. In the video, she explained that she and LaValle "had been trying to have a baby since July," and said, "I was getting a little worried because it wasn't happening as soon as I wanted it to." But ultimately, Snooki told her YouTube followers that she's since realized the timing of her third pregnancy was perfect:

We've been wanting another baby since Giovanna turned 3. It just wasn't the right timing, you know? ... I wanted to be completely ready — and you're never really ready for a baby — but for your third, you can plan when you want to be ready. And I just wasn't ready.

One thing Snooki has long seemed sure of though, even back in 2016? That, as much as she may love her little "mini-me" daughter, 4-year-old Giovanna, she was *definitely* hoping to have another son. Although already mom to 6-year-old Lorenzo, Polizzi told E! News at the time that she "[didn't] want any more girls," and admitted, "If I have a girl, I'm just going to be really upset about it."

But it sounds like she wasn't the only one. In December, Snooki and LaValle revealed the sex of their third child in a YouTube video, and though the couple had actually already previously learned that they were having a boy, they'd decided to keep it a secret so that they could host a sex reveal party for family and friends. In the lead up to the party, Snooki asked her kids whether they thought they'd be getting a little brother or a little sister, and after both of them responded that they thought the baby was a boy, Lorenzo quipped, "If it's a girl, I'm gonna die."

Ultimately, Lorenzo got his wish — and in fact, he was also the one who had the job of breaking the news to everyone else. For the big reveal, Snooki and LaValle had their son hit a baseball filled with blue powder that cracked open and let guests know that a little boy was on the way (soon-to-be big sis, Giovanna, watched from the sidelines along with her mom.)

So while LaValle may have initially played Snooki's pregnancy news off like it was no big deal, it's pretty clear that the entire family couldn't be happier that they'll soon be welcoming a new member. And it seems like their baby boy will be joining one super fun and loving family.