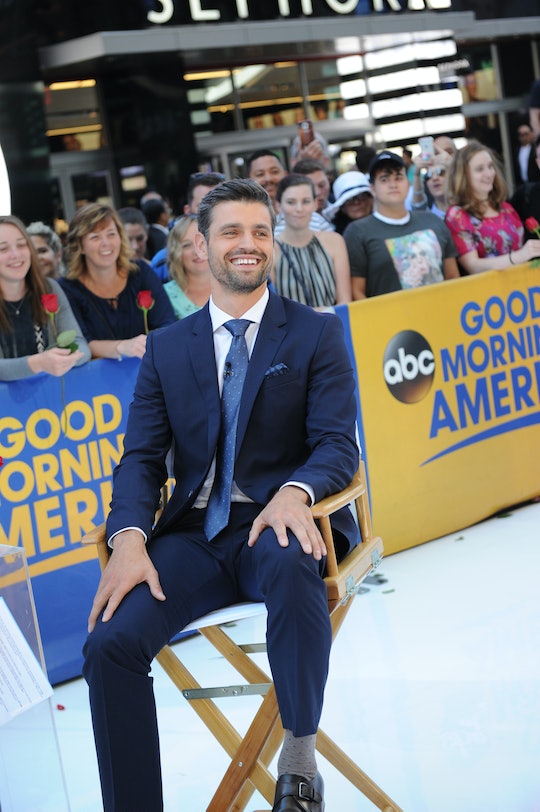 So *This* Is How Nikki Bella & Peter Kraus Got Together

It's not easy being a former Bachelor or Bachelorette contestant. There are so many faces in and out of the ABC mansion, it's impossible to remember the Chads from the Jordans. OK, so those were two memorable examples, but can you name 10 more? If you didn't list Peter, did you even watch Season 13 of The Bachelorette with Rachel Lindsey? Whether you did or didn't, Peter Kraus is one of the men who stood out. These days, he can be seen in a clip for Total Bellas. But fans are curious how did Nikki Bella and Peter Kraus met in the first place.

It seems as though the answer to this question is the most obvious. Nikki's twin sister, Brie, matched Nikki and Peter together. In a clip via E! News, Brie mentioned wanting to set up her fellow Bella with a very specific man. I know when I think of matchmaking my twin sister (whom I don't have) my first thought is "let's go with Peter from The Bachelorette." Not. I guess it doesn't matter how Nikki and Peter came together, but it does matter what they did on their date. It's an important milestone — being the first widely talked about date since Nikki's split with WWE wrestler, John Cena. Previews for an upcoming episode shows the 5-hour first date (wow!) involved sipping wine on a gondola. Bachelor much, Peter? Dude even goes in for a kiss to which Nikki explains she's not really ready for all that yet. #Respect.

The reason Nikki rejected that kiss? At the time of filming, not much time had passed since Nikki and John's breakup, or since she went back "on the market." (And why is that a saying, BTW?) Nikki and John spent six years together and broke up a few weeks before their May 2017 wedding date. I still stings, TBH. There was a little glimmer of hope when they got back together a month later, but broke up a month after that. Then, there was a little more hope when they got back together again, and broke up again. Oof. It's apparent Nikki still has a lot of love for John, admitting she hasn't kissed anyone else in years and saying she tells him about her dates so he's not caught off guard by the tabloids. At the time of the breakup, Nikki issued a statement on Instagram confirming their fans' worst nightmare — they decided to separate "as a couple."

All of this on-camera romance doesn't seem easy. Peter knows all about love on the small screen. On trying to find the right woman after The Bachelorette, the silver fox said to Us Weekly, "Going on dates … If anything, this sounds terrible, too easy so finding someone who’s wanting to date me for the right reason is very different." Though he may have said dating in this particularly public kind of way wasn't his thing (anymore), he couldn't help but fall for the amazing Nikki. Plus, Peter seems to have had a thing for the Bella twin since back in October when Us Weekly informed him Nikki followed him on Instagram. "She’s beautiful," he said. "I'm turning red." It's clear the two were meant to meet, even if it didn't last all that long. Honestly, I think that's the way love goes in the public eye and I'm sure these two get it.

Being a twin has it's perks and it's cool Nikki has such a supportive sis willing to help her find Mr. Right. Maybe one former Bachelorette contestant wasn't it, but there are tons more to choose from, FYI.