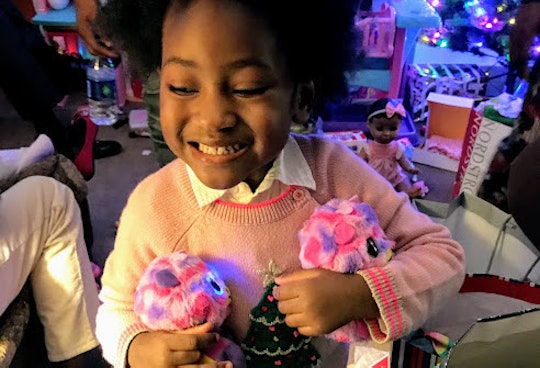 How *Not* To Hatch A Hatchimal

This year I got my Santa Claus paws on a coveted golden egg — Hatchimals Surprise. I have seen my fair share of unboxing videos on YouTube, and that, mixed with my millennial nostalgia for Tamagotchi and Fuby, of which Hatchimals are basically a hybrid, made me super excited for the toy. In 2016, they were basically the present of Christmas, and impossible to get. This year, I got one for my three-year-old daughter, and really couldn't wait to see her face when the Hatchimals actually ~hatched~. But the gods of Christmas had other plans. Parents! If you are in possession of a Hatchimals Surprise, here is what you need to know!

Unbeknownst to us, she began to rub the egg and give it love.

On Christmas morning after the hallowed unwrapping (sadly unYouTubed), my kid had little patience to focus on the egg when it turned colors that we had yet to understand. The colors, if you aren't familiar, indicate hatching activity. Ideally, you want to keep an eye on the eggs so you know when the miracle is going down. But when there is lots of stimuli around — huge pink Barbie houses and talking laptops — toddlers will roam. My three-year-old was off roaming her kingdom of presents when the all-important color change took place, and you don't need to have seen Jurassic Park to know where this is going.

So the house was full, and my eight-year-old cousin, a YouTube-generation native, had alternate plans for that lonely egg that we couldn’t wait to explore once our company left.

She walked in and picked up that egg that we barely had time to read up on and adequately understand so that we — the adults and not the kid — had time to play with it ourselves. Unbeknownst to us, she began to rub the egg and give it love. Me, a 30-year-old woman, had daydreamed back to the days when the Tamagotchi egg took what felt like days to hatch into a little circle-looking thing that I had to care for after its birth. But the Hatchimal doesn’t work like a Tamagotchi — it’s hatching can be instant, the second you show the thing some love.

I internally wept that I hadn’t been able to capture the moment on social media or, even better, have my nostalgic adult hands on the egg during the magical moment. My toddler missed the entire thing.

As I’m watching my little cousin rub the egg nonchalantly, I am thankful that she’s mature and hip enough to show us how it’s done. I also feel my youth draining from my veins, as I didn’t intuitively know how to operate the thing. Thankfulness quickly turned to terror, though, at the sight of that perfectly speckled egg beginning to crack. Like those unboxing videos on YouTube, I watched our own little animal husbandry expert peel back the eggshell to make way for the birth of those two little animals.

The Hatchimals sang happy birthday (to themselves) as they entered the world and it felt magical, the entire room fixated on these two animals being born in our living room. But at the same time, I internally wept that I hadn’t been able to capture the moment on social media or, even better, have my nostalgic adult hands on the egg during the magical moment. My toddler missed the entire thing, bouncing from toy to toy.

I thought about how ridiculous my initial feelings and reactions were during the hatching process. I felt more toddler-like than my actual child, and realized that this moment was what holiday memories are made of and what makes living in the present a New Year’s resolution I should aspire to. I realized what joy the eight-year-old, age-appropriate to understand and appreciate a Hatchimal, received from being able to show off to the adults the very thing we were all intrigued with and struggling to understand. I realized that my toddler didn’t have the patience or bandwidth to sit still and decode a toy designed for an older child. This toddler’s tearful reaction, in fact, made me even more grateful that our cousin had actually saved her from potential trauma.

I also realized that I can be a huge baby well into my thirties, and the importance of the toy is that everyone is happy, no one walks away in tears and it’s OK if I didn’t capture the moment on my phone. The more important moment was us clueless adults getting such joy out of being aloof and then surprised to watch the hottest toy in our living room come to life. While Hatchimals are a pricey one-and-done deal of a toy, I am eternally grateful for how the reveal went down.