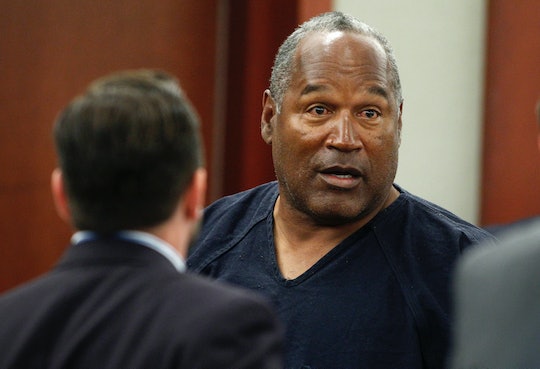 How Not To Respond To OJ Simpson Getting Parole

On Thursday, after meeting in front of the Nevada Board of Parole Commissioners, O.J. Simpson was granted parole from a Nevada prison after serving nine years for armed robbery, kidnapping, and assault with a deadly weapon. Of course, and since the parole hearing was televised, Americans took to Twitter to share their reactions to the news that, come Oct. 1, Simpson will likely be a free man. Along with those reactions, sadly, were perfect examples of how not to respond to O.J. Simpson getting parole. Honestly, Twitter, sometimes the jokes are anything but necessary.

Of course, most of the ridiculously inappropriate tweets have to do with the Kardashian family, more specifically Khloé Kardashian. While Simpson first rose to superstardom as a football hero and NFL legend, he became infamous when he was accused of killing his wife, Nicole Brown Simpson, and her friend, Ronald Goldman, in 1994. The highly publicized and often dramatic court case, which ended with Simpson being found not guilty, not only solidified his infamy, but the infamy of his lawyers as well. One of those lawyers was Robert Kardashian, the father of Khloé, Kim, Rob, and Kourtney Kardashian. It is perhaps the O.J. Simpson trial that gave the Kardashian family the notoriety that allowed them to eventually become a household name. Not only was the late Robert Kardashian (who died of esophageal cancer in 2003, according to The Los Angeles Times), best friends with O.J. Simpson and reactivated his law license to help defend his friend, but Kardashian's wife at the time, Kris Jenner, was best friends with Nicole Brown Simpson prior to her untimely death.

So, sadly, if you know the internet at all it was to be expected that the first round of horrible reactions had to do with the Kardashian family. Many allege that Khloé, whom some say looks differently than her sisters, was actually the result of an affair between Kris Jenner and O.J. Simpson. According to Life&Style, the couples — Jenner and Robert, and Nicole Brown Simpson and O.J. Simpson — would vacation together as a group prior to Jenner and Kardashian's divorce. Still, even though there's no proof that Robert isn't Khloé's father, the internet persists with disgusting jokes. And, to make matters worse, they're jokes about a family who has lost its father figure to cancer and another family whose daughter was murdered.

There were also multiple unnecessary references to Simpson's 1995 acquittal, even though it's been 22 years since the not guilty verdict heard around the world. And while he was ultimately found not guilty in the eyes of the law and the American justice system, there's something profoundly disturbing and offensive to joke about the possibility that he was, in fact, guilty of murder, and it is somehow "funny" that he was able to bypass a guilty verdict. It's disrespectful to the families of the victims, and, honestly, it's low-hanging fruit. The internet should, honestly, be better.

I'm not one to tell someone how to respond to the news. In fact, in the current political climate we're all forced to endure, I would go so far as to say lightly poking fun at undeniably serious topics and situations is almost necessary: in the end, a smile and a laugh can take you far. Still, there's a right and wrong way to handle the news cycle, and OJ Simpson being granted parole is no different. We can do better than tweeting tasteless jokes. We must do better.