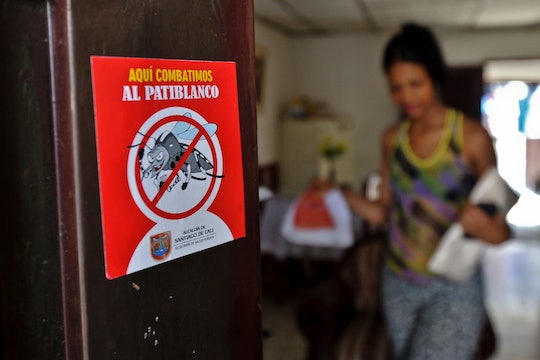 How Noticeable Are Zika Symptoms? You Can Have It & Not Know It

As the number of Zika cases continues to increase throughout the United States, many are feeling scared and wondering how noticeable Zika symptoms are. It turns out that Zika symptoms are similar to the common cold, which is both a blessing and a curse. On the one hand, being sick with Zika isn't all that bad (unless you're pregnant, of course), but on the other hand, you might not even realize you have it.

According to the Centers for Disease Control and Prevention (CDC), the most common symptoms of Zika include fever, rash, joint pain, or conjunctivitis. Other symptoms might include muscle pain and headache. All of these symptoms are fairly common and indistinguishable from other common ailments like the flu or the common cold. According to Time, the rash is a good way to indicate a probable case of Zika in a person who has recently traveled to one of the 40 countries with endemic Zika.

In addition to the cold-like symptoms, the main reason Zika is difficult to detect is that most people infected with the virus don't show any symptoms at all, according to the CDC. This is a particularly scary situation for pregnant women and their partners, because Zika can cause microcephaly, a severe birth defect. According to CBS News, current estimates are that between 1 and 13 percent of women who contract Zika in the first trimester will give birth to a baby with microcephaly.

Due to the significant risks of contracting the Zika virus while pregnant, health officials now recommend that women who travel to Zika areas should wait at least eight weeks before trying to get pregnant, according to Time. Moreover, since Zika can be sexually transmitted, men who travel to Zika areas should abstain from sex or use contraception for a full six months, whether or not they showed symptoms, because it appears that the virus stays active longer in sperm than in blood.

Women who don't intend to get pregnant right now are understandably worried about future pregnancies. The good news is that Zika appears to clear from an infected person's blood stream within eight weeks tops, so it's okay to travel to a Zika area without worry so long as plans for pregnancy aren't immediate. For the future dad, though, the same six-month wait after travel to a Zika area would be necessary.

When it comes to Zika, it's pretty clear that pregnant women and hopeful future parents are the most affected. For everyone else, it's a matter of getting over a short sickness, if there are even symptoms at all. That being said, though, occasionally symptoms manifest in more extreme ways. According to ABC News, Detroit Tigers pitcher Francisco Rodriguez believes that he contracted Zika during a trip to Venezuela, and he was miserable for two weeks.

With the warmest summer days already upon us, everyone is hoping that cases of Zika will remain relatively low in the United States—and for those that contract Zika, let's hope that they have a less severe case than Francisco Rodriguez.