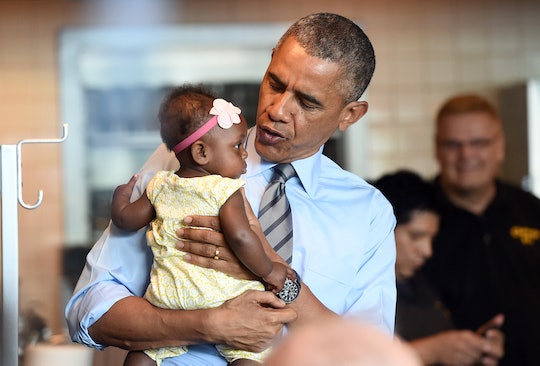 Weighing the pros and cons of repealing the Affordable Care Act (ACA), or Obamacare, brings some key issues to light. The law provides plenty of benefits contingent on one's own financial and health situations, especially in the case of working, breastfeeding mothers. If you're a mother yourself, you're likely wondering how an Obamacare repeal would affect breastfeeding moms. Unfortunately, it appears that certain rights granted by the extensive law would likely be taken away.

In 2014, the ACA assured that "employers must provide time and space for new mothers to express milk for their babies until the child turns one year old," an absolute game changer for working mothers. The "time" mentioned is defined as "a reasonable amount of time" with no limits on frequency. As for "space?" "It should be a room, a separate quiet place, not a bathroom," advised Dr. Richard J. Schanler, director of neonatal services at Cohen Children’s Medical Center of New York in New Hyde Park. In addition to providing time and space to breastfeed or pump, the ACA currently requires that "most health plans must offer breast-feeding support and equipment, such as pumps, without a patient copayment."

The benefits of allowing breastfeeding and pumping at work are many. Dr. Arthur I. Eidelman, past president of The Academy of Breastfeeding Medicine and current professor emeritus of pediatrics at Shaare Zedek Medical Center in Jerusalem, told Reuters:

Studies have shown that employers make back two to three dollars for every dollar they spend on workplace lactation resources due to greater employee productivity, less employee turnover and less time off for mothers who have to take care of their sick child, given that infants have 30 to 50 percent fewer infections when receiving breast milk.

Seeing as "the United States is the only industrialized nation in the world without paid maternity leave," allowing breastfeeding at work appeared to be a step in the right direction, making things much easier for working moms who no longer had to choose between providing for their families monetarily and providing milk for their babies. Now, that's all in jeopardy.

Losing ACA would also mean losing the ability for a woman to choose her own OB-GYN, among many other changes. It's unclear what an Obamacare replacement will look like yet, so it's also unclear to what extent — if any — breastfeeding mothers will be considered. Hopefully, the Republican's replacement plan manages to keep some of the many helpful improvements introduced by Obamacare.