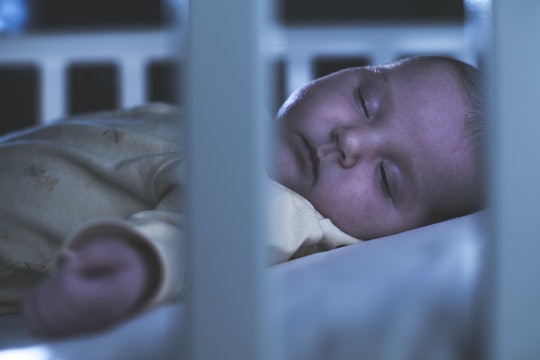 How Often Do Babies Poop When They Sleep? It's Something All Moms Dread

After you become a mom, no topic is off limits. Frantically searching for answers about your baby's bowel movements, spit up, weird smells and a host of other bodily functions, is just par for the motherhood-course. It's part of a mother's job to make sure everything is running smoothly (both literally and metaphorically), in your newborn's little system. One of the most worried about bodily functions is your baby's bowel movements. They're unreliable at first, and much like a time bomb, can erupt at any hour of the day. But just how often do babies poop when they sleep? It's a question worth researching. Mostly because changing a poopy diaper in the middle of the night usually isn't high up on the list of the perks of motherhood.

According to Parenting's "Guide to Baby Poop, Pee, and Spit Up" (a glamorous title, I know), most newborns will poop immediately after a feeding, so you can probably expect them to poop during the nighttime hours at first, especially when they're nursing at night. Breastfed babies can also go longer (ie. a few days) without pooping, according to an article from Parents and it is no cause for concern.

Additionally, formula fed babies poop less frequently, according to Baby Center, so if you're using formula, nighttime poops may be less of an issue. In fact, they may go a few days without pooping as well. There's really no regulating their little digestive systems.

As your baby gets older and you introduce solids, there are a few things you can do to try and keep the dirty diapers for daytime use only. Namely, avoid giving your baby especially fibrous foods in the evening or before bedtime. However, Parenting notes that baby's systems are generally very healthy and so worrying about diarrhea or constipation is rare.

In short, how often your baby poops at night is totally up to your baby and their individual digestive system. And although that may not help your sleep schedule or the amount of diapers you change while in a zombie-like state, your mind can rest a little easier knowing that nighttime poops are a sign of a healthy system.