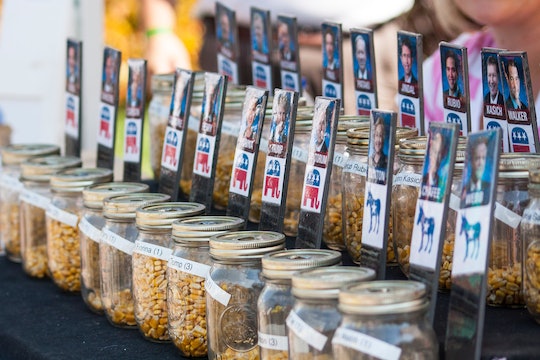 How Often Does the Iowa Caucus Predict The Presidential Nominees? It Can't Guarantee Anything

The Iowa caucuses are perhaps the most bizarre and archaic facet of the United States' voting process. To sum it up as succinctly as possible, the Republicans and Democrats each hold these evening events throughout Iowa's 1,681 precincts, and attendance is required to vote (with some small exceptions). Republicans choose their nominee via a secret ballot, while the Democratic events are described by Vox as "rowdy, hours-long public affairs" involving debates, and voters must actually cross the floor to literally stand with their candidate's supporters. They're basically adults playing Red Rover, but the Iowa caucuses do often predict the presidential nominees.

It's a bunch of crazy nonsense, but since 1972, it's a bunch of crazy nonsense that's given a lot of weight in terms of choosing each party's nominee. Why? Because voters let it. Sure, the people of Iowa are not at all representative of the rest of the country, but the presidential hopefuls are still looking for their vote. And the media coverage makes it seem like it's important, so voters believe it is. And once everybody believes that something's important, by default, it is.

It's sort of like how the Kardashians operate: they're on TV and magazine covers, so fans assume there must be a good reason for it. So they watch the shows and buy the magazines and then the Kardashians are super important. Make sense now? Voters assume that Iowa knows what they're talking about because they're on TV, so when the primaries come to their states, they take Iowa's word for it.

So, how often does Iowa get it right, or at least skew the rest of the country? Of the ten Democratic caucuses held between 1976 and 2008, eight of the winners eventually went on to secure their parties nomination. One notable exception was Bill Clinton, who only got 3 percent of the the Democratic vote — three percent! — yet went on to win not only the nomination, but the election.

Over on the Republican side, only six of the winners have gone on to be nominated. The last two caucuses have been particularly out of step with the rest of the country; 2008 saw a win for former Arkansas Gov. Mike Huckabee, and 2012's winner was former Pennsylvania Sen. Rick Santorum. Vox pointed out that four out of five registered party members don't attend caucuses, and that the Republican caucuses have recently been dominated by evangelical activists, which explains a bit. In fact, according to the Chicago Sun-Times, that Huckabee win was decided by only two percent of Iowa's voters.

Going by the data, which is only a sample of 10 and not all that scientifically significant, the Democratic winner has an 80 percent chance of becoming the nominee, and the Republican winner has a 60 percent chance (less so if it ends up being a far-right candidate with little national appeal). But the most important thing to remember is that a handful of people in Iowa are no experts in politics; they're just the first to vote, and therefore given way too much attention for doing so. The results don't hold any weight if voters across the country don't let them.