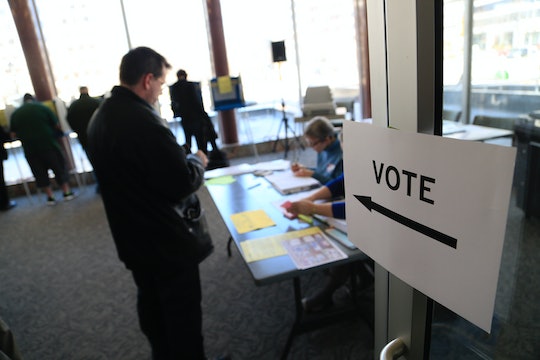 How Often Does The New York Primary Winner Win The Nomination? It's A Great Predictor

Over the course of last five election cycles, New York "called it right" in all cases but one, according to the New York Board of Elections. (In 2008, Hillary Clinton won New York, but current President Barack Obama would go on to secure the nomination and a seat in the Oval Office.) That means that, when it comes down to it, New York has a pretty good pulse on the nation.

However, that isn't the only reason Tuesday's primary matters. On Super Tuesday — when multiple states hold primary elections and caucuses on the same day — former Secretary of State Hillary Clinton and business mogul Donald Trump each won seven of 11 states. However, their rivals, who won a combined eight states, vowed that day to stay in the 2016 presidential race. And since Super Tuesday, Vermont Sen. Bernie Sanders, Texas Sen. Ted Cruz, and Ohio Gov. John Kasich have picked up quite a few delegates — and quite a few states — of their own, making this a closer race than usual. But why does New York matter?

As Ed Cox, chairman of the New York Republican Party, explained to Sryacuse.com, normally "late-voting states" aren't as important, as one person from each party usually has a clear and almost unchallengeable lead:

We're looking forward to having that kind of contest where New York plays an important role in picking the president of the United States.

But since that dynamic doesn't exist this year, New York's delegates could play an important role in deciding the each parties' presidential nominee. Why? Because New York is a big delegate state. There are 291 Democratic delegates up for grabs (the second highest amount nationwide), and 95 Republican ones (the fourth highest), and while New York isn't a "winner-take-all" state — according to Syracuse.com, the delegates up for grabs on Tuesday will be split proportionally by congressional district — if Clinton and Trump really want to stand out from the pack, they need to win New York. And they need to win by a lot.

Regardless of what happens, one thing is for sure: all eyes will be on New York this Tuesday.