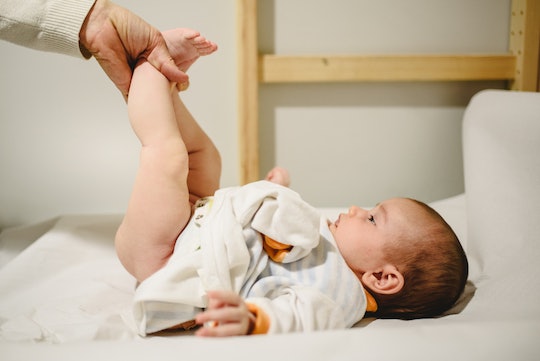 Parents spend a shocking amount of time thinking, talking, and worrying about poop. Is there too much of it? Not enough of it? Is it supposed to be that color? Does it always stink that bad? For babies who drink breastmilk, there's also another big question that plagues moms and dads: how often should a breastfed baby poop? It's not necessarily a simple question to answer.

When it comes to breastmilk baby bowel movements, there's actually a huge range of normal. Breastfed newborns might dirty their diapers after every single feeding, according to Baby Center — so you could easily go through eight, ten, or a dozen changes a day. That's because as the Mayo Clinic explained, breastmilk is easier to digest than formula, so it moves through a baby's system pretty quickly. Formula-fed babies, on the other hand, tend to "pass fewer — but larger and smellier — stools," according to Parents. That's not to say that every breastfed baby is going to be a tiny poop machine, however. Kelly Mom noted that one poop a week once they're a month old can also be perfectly normal. As long as your baby is happy, comfortable, and growing, the number of poops isn't a huge deal.

Wondering when that next poop is going to come can still be worrisome for parents, however. Even though pooping just a few times a week might simply be the norm for your little one, it's worth knowing the signs of constipation. Healthline noted that constipation is fairly rare in breastfed babies, but you'll know something is up if they don't want to eat, have a hard belly, and get very agitated and strain as they try to poop. Poop problems in a breastfed baby like constipation or diarrhea could also be signs of an allergy to something in mom's milk, according to the Children's Hospital of Philadelphia. If anything about your baby's dirty diaper situation is making you anxious, it's worth running your concerns by your pediatrician.

Both of my kids happened to be on the frequent pooper end of the spectrum, which means I've gone through what feels like millions of diaper changes in my day. But as icky and expensive as it can be to be constantly cleaning up poop, it's actually kind of a good thing. Lots of diary diapers generally indicate that your baby is getting enough breastmilk, according to Parents. If you're nervous about your supply or your little one's latching technique, your dwindling supply of Pampers should be reassuring.

Whether your breastfed bundle of joy is pooping once a week or once every few hours, it's important to know that the number of pee diapers should be a little more consistent. Healthy Children noted that anything less than six wets diapers a day is cause for concern with an infant, as it could indicate dehydration. When my son caught a cold at 2 months old and went on an eating strike, it took less than 12 hours for him to get dehydrated enough to land himself in the hospital — thankfully, I knew what to watch out for and took him to be seen right away.

If you want to keep tabs on the number of wet or dirty diapers your baby goes through in a day, there are tons of apps that you can use to log them. Taking a few moments to track everything can help you figure out if there are any worrisome changes, or better yet, let you realize that everything is all good.