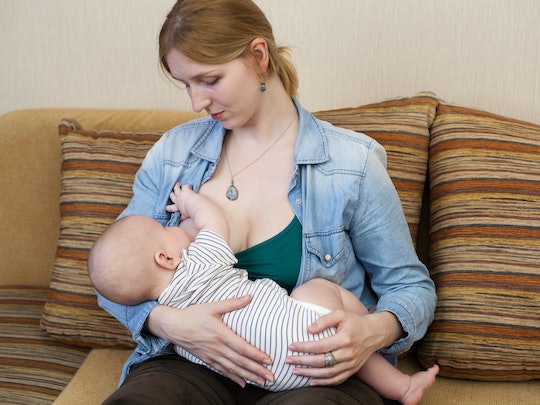 Here's How Often You'll Be Breastfeeding Your Baby

Once your baby is born, you have to make numerous adjustments as you get used to your new baby, your new body, and your new schedule (or lack thereof.) If you're breastfeeding, you're no doubt asking yourself "just how often should I breastfeed my baby?" It can be hard to determine whether you should set a schedule, breastfeed on demand, or just let time tell what works best for you both. Not to mention, La Leche League International (LLLI) noted that since every baby is different, breastfeeding "schedules" will look different from one baby to the next.

According to Kids Health, a newborn should be nursing about eight to 12 times per day. That breaks down to every two to three hours, even at night. The San Diego Breastfeeding Center noted that many experts recommend nursing your newborn on demand, as opposed to creating a nursing schedule. "Watch your baby, not the clock," the site stated. Additionally, the LLLI article mentioned above noted that breast milk is digested much quicker than formula which means that your baby may need to nurse more often than you expected. Belly Belly recommended following baby's hunger cues, and don't worry too much about sticking to a schedule.

As your baby gets older though, their stomach gets bigger too, which means they're able to hold more food, and eat less often. LLLI noted that your baby will more than likely place themselves on their own nursing schedule as they get older, without much interference from you.

In older babies (under six months) you can probably expect to nurse around every three to five hours, and probably through the night unless your child sleeps in long stretches. The Bump noted that, as your baby gets older and you introduce solids, you'll be less worried about how much and how often your baby nurses. You'll learn their hunger cues by heart and nursing will become second nature as time goes on.

One thing that may through you for a loop is when your baby goes through growth spurts or sleep regressions. Very Well noted that during those periods, regardless of how well scheduled your nursing sessions are, you can expect to breastfeed much more frequently and literally whenever your baby decides its time to eat.

Breastfeeding is a marathon, not a race. It takes time to learn your baby's cues, so be patient with both of you. Eventually, knowing how often you should breastfeed your baby will become so second nature you won't even think about it.

More Like This
Experts Explain Whether It’s Safe For Your Baby To Sleep On Your Chest
The Difference Between The PICU & The NICU
What NICU Means & What To Expect From A NICU Stay
Can You Breastfeed After A Breast Lift? Experts Explain