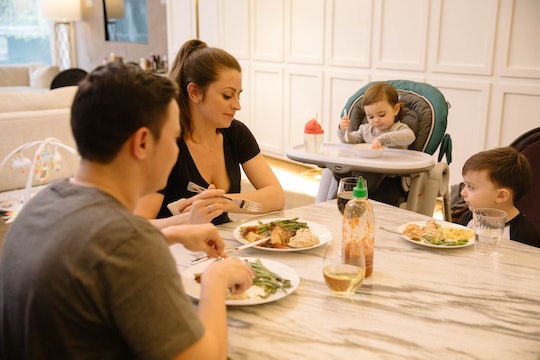 As I sit and watch my 6-year-old shovel more food in her mouth in one meal than what most Marines eat in a day, I laugh thinking back to when I worried over feeding her a little congee. I worried, "How often should I feed my baby solids?" The answer surprised me — I thought for sure that it would be all the time. It turns out, that particular amount of food is saved for when they hit a mondo-sized growth spurt and their intake goes from baby robin to turkey vulture in size.

My son was a breastfeeding machine. It was difficult to even get him to want to eat solid food, let alone eat it on any kind of schedule. He was happy with his meal straight from me, and went on about his day until he'd finally get into some tasty morsels that weren't served with a side of hair to pull. My daughter, however, was really into solids. She took to it like a fish to water, and as soon as she got a taste of some of the good stuff, she was less interested in milk. According to Kelly Mom, that's normal. Some kids just want foods more quickly and more often than others.

If you're wondering how often you should feed your baby solids, The American Academy of Pediatrics (AAP) recommended starting baby with solid foods at 6 months, in small amounts. They recommend only a few spoonfuls at a time, and that it's best to try it in the early afternoon when they're likely to be the most receptive to foods.

As they grow and mature, the Stanford Children's Health Network laid out the basics of feeding your baby, beginning at 6 months. They start at 6 months with a few tablespoons of food per day, mostly proteins, fruits, and veggies, and by one year, you'll be feeding your baby the equivalent of three small meals and two snacks per day. The AAP suggested starting with meat and fruits or vegetables instead of the popular rice cereals because the nutrients occur naturally and are not forced into the food via fortification.

The website of Dr. Sears wrote that you'll most likely be able to tell by your baby's cues when they're hungry and when they're full, and how much to feed them. It may be several times a day — grazing style — or they may be more focused to a few times of concentrated eating in a day.

Some cues for hunger include mouthing their fists, grabbing at the spoon, and making "the hungry growl." When they're full, they'll close their mouths, turn away, and sometimes return the food to you. Sometimes, in my experience, that food lands on the wall, your face, the floor, all over the dog, and possibly the waitress. The point is, you'll know.

However, the Cleveland Clinic noted that all babies are different, and their needs will be as well. As long as they're thriving, and your provider agrees, your schedule will need to be flexible to mold to their needs, as will your cooking, and perhaps your laundry. You know your baby better than anyone, and you and your pediatrician will be the best judges of their dietary habits.