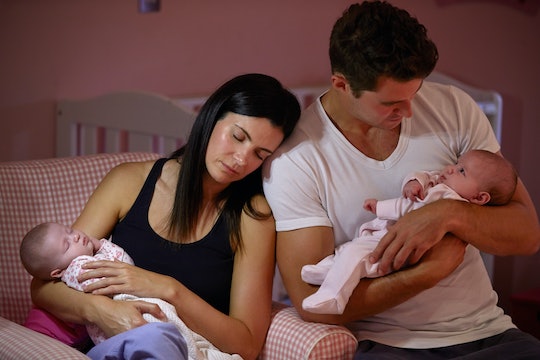 Here's How Often Your Baby Should Wake Up At Night, According To Experts

There are a few questions every mom can expect to be asked after she brings a new baby into the world. People usually want to know what your baby's name is, how you gave birth, and, of course, if your baby is a "good sleeper," whatever that means. The constant questioning can leave even the most self-assured mother questioning what's "normal" and what isn't. So when it comes to a newborn's sleep schedule, how often should a baby wake up at night? Turns out, there really is a recommendation for the number of late-night wake-ups. It's just that, well, you might not want to know the answer.

The Stanford Children's Hospital says that babies often have their days and nights mixed up so, as a result, they wake frequently in the night. The hospital's site goes on to say:

"Most babies do not begin sleeping through the night (6 to 8 hours) without waking until at least 3 months of age, or until they weigh 12 to 13 pounds."

The Stanford Children's Hospital also says that many babies will not sleep through the night until they are 1- year-old or older. So, unfortunately, an eight hour sleep cycle is out of the question until you ring in your baby's first birthday. Yay parenthood, right?

The Bump breaks it down more specifically for parents, citing the frequency of nighttime wakings new parents can expect to experience in any given night:

"Newborns generally need between 8 and 12 feedings per day, which translates into waking for feedings on average of every 2 to 3 hours. Of course, every baby is different and some newborns seem to wake every 90 minutes, while others sleep 4 or 5 hours straight their first night home from the hospital."

The Bump also says that many doctors advise parents to wake their newborns to eat on a schedule, citing "every three hours." That's not every doctor's recommendation, though, as highlighted by the site:

"Others say just leave well enough alone and let a sleeping baby be. If your baby was premature, has health issues, or isn't gaining weight at an appropriate level, it might be necessary to wake her to eat. If your doctor says it's OK, just leave your newborn alone if she's sleeping, only waking her if she sleeps longer than 5 or so hours during the night. Follow your doctor's guidance."

Sleep deprivation can make you desperate and have you comparing your child to every other baby out there. It's worth remembering, though, that every baby is unique and there really isn't a normal standard for sleep. It's also worth remembering that newborns have tiny stomachs and wake in the night because they are hungry. The Baby Sleep Site suggests that small babies are not ready for night weaning and will, therefore, wake to feed until they are a year old. The frequency in which they feed, as highlighted above, will vary depending on your baby.

The way you choose to feed your baby can make a difference, too. Breastfed babies tend to need to feed more often than formula fed babies. WebMD believes this can impact sleep for babies and parents, saying:

"Formula isn't digested as quickly as breast milk, so formula-fed babies don't need to eat as often, especially in the first few months."

Regardless of how your baby feeds, it is perfectly normal for babies to wake several times a night in their first year of life. Some parents decide to try sleep training methods and night weaning after their baby reaches 6 months of age, but if you're comfortable (and able) there is no need to change anything about your baby's sleep schedule. In the end, it's probably "normal."

Everyone needs good quality sleep to function optimally. Unfortunately, it can often feel like babies didn't get the memo and, as a result, aren't going to allow you to enjoy the amount of sleep you need. When it comes to your baby's sleep schedule, though, rest assured: the frequent in-the-middle-of-the-night wake ups are probably normal. They're not fun, to be sure, but they're normal.