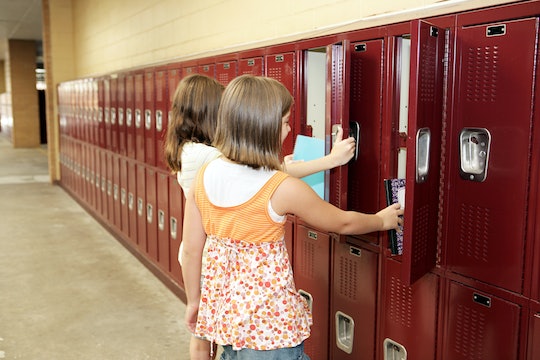 This School Is Deep-Cleaning After A Flu Outbreak — Should Yours Do The Same?

With this year's intense flu season still going strong, keeping school environments clean and safe is a top concern for plenty of parents and teachers alike. While parents have control over the cleanliness on the home front, another party is tasked with keeping germs onsite at school. Overall, how often should schools deep clean to prevent the flu from getting out of hand? Maintaining a sanitary learning environment takes a lot of work, but it's crucial to protect the health of kids and staff alike.

Not surprisingly, some schools are electing to do a thorough, deep clean of their facilities, in hopes of extinguishing any trace of the influenza virus. CBS New York reported that in Elizabeth, New Jersey, “all schools have been sanitized each day since the fall with a neutral disinfectant DS-1, which is effective in removing all pathogens,” according to a letter sent to parents from the superintendent. This was sent in response to the death of a 7-year-old student who passed over the weekend. In addition, all buses also received the sanitation treatment, according to CBS New York. In Connecticut, a 6-year-old girl died also over the weekend, possibly from flu-related complications, reported CBS New York. "As a precaution, I have asked for a deep cleaning to be completed before school reopens on Tuesday,” said Principal Medard Thomas.

While this may sound reassuring to some, others may question how effective a deep clean actually is. In general, schools do not need to perform a deep clean in order to prevent the spread of the flu virus, because the school's daily cleaning and sanitizing routine should be sufficient to counteract the virus, according to the Centers for Disease Control and Prevention (CDC). As long as the routine cleaning in the school is done effectively, the flu's outbreak should be sufficiently contained. That said, the routine cleaning recommended by the CDC is admittedly pretty thorough. Areas that are touched frequently, including desks, doorknobs, and keyboards, should be sanitized daily, according to the CDC. In addition, areas of the school that may harbor high number of germs, such as bathrooms, may also be disinfected every day. As long as these cleaning and sanitizing procedures are in place, the school building itself is unlikely to pose a serious health hazard.

When a school does close for a deep cleaning, it tends to be in response to a flu outbreak that is already underway. In general, the school has shut down temporarily due to the large number of absences from people sick with the flu, so it makes sense to do a more thorough cleaning when the entire building is empty for an extended time. Even professional cleaners themselves admit that the deep cleaning efforts are possibly more intense than what is strictly necessary, however.

"The detailed cleaning of the disinfectant is almost like insurance on top of the regular cleaning that you have right now," said Rene Moreno, operations manager of a cleaning company in North Texas, in the Dallas Observer. Moreno and his colleagues have cleaned several schools in Texas that were shut down for flu outbreaks. Even though it may not be strictly necessary, cleaning the schools beyond what the CDC deems essential may give parents and teachers an additional sense of safety.

Even if the deep cleaning of closed schools is excessive, the severity of this year's flu outbreak has left a lot of people understandably concerned. In a particularly heartbreaking statistic, consider the fact that at least 63 children have already died from this year's flu season, as reported by NBC News. If school officials get a little peace of mind from over-cleaning the gyms and cafeterias, then chances are no one is worse for it.

In addition, there are many other ways to prevent the spread of flu at your child's school. First and foremost, making sure everyone in your family has a flu shot is crucial. Flu shots are the most effective means of preventing the flu, as noted in the Mayo Clinic, and it is not too late in the season to get one now. If you or your kid does get sick, stay home to prevent the spread of infection to others. Yes, make-up work from school (or work) can be a drag, but keeping your family and others healthy is key. Lastly, encouraging your kid to maintain good hygiene is a smart move. In fact, simply washing your hands with soap at key moments may reduce the risk of respiratory infections by as much as 21 percent, according to the Global Handwashing Partnership. There is so much parents and educators can do at home and school to help prevent the spread of flu, and everyone should do their part.

More Like This
14 Recipes For Sick Kids When Everyone's Tired Of Canned Soup & Crackers
A Parent’s Guide To Stomach Pain In Kids
Teacher Shot By 6-Year-Old Student Told School He Had A Gun, Was Told To "Wait"
13 Is "Too Early" For Kids To Be On Social Media, Surgeon General Cautions
What Parents Are Talking About — Delivered Straight To Your Inbox