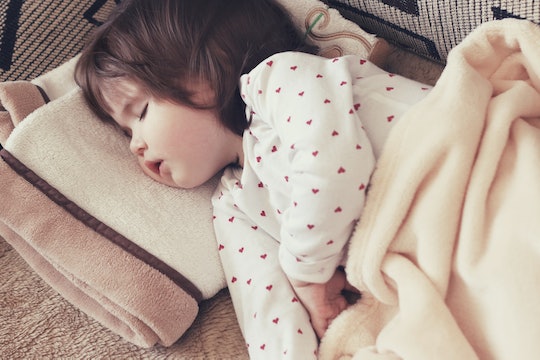 Here's How Often (& How Long) Toddlers Should Nap

It's pretty obvious that babies need a lot of sleep — most need at least two to three naps per day. But once your baby reaches toddlerhood, nap time becomes a bit more ambiguous. Asking "how often should toddlers nap" is a common question on most parent's minds. An overly-tired toddler is one of the most formidable forces known to humankind — trust me, I have two who often refuse naps. So making sure your kiddo gets enough sleep during the day is just as important as them getting enough sleep at night.

According to Kids Health, ensuring that your toddler gets about 12 to 14 hours of sleep per day — including an afternoon nap — can help them sleep better at night, keep their mood stable, and encourage healthy physical and mental activity when they're awake.

In fact, a daily nap for your tot might be more important than you know. According to a study from the University of Colorado Boulder, toddlers who miss out on a daily nap show "more anxiety, less joy and interest, and a poorer understanding of how to solve problems." Proper sleep, the study found, is as essential as proper nutrition when it comes to a toddler's health.

However, the National Sleep Foundation (NSF) noted that the duration of your toddler's nap will largely depend on how old you toddler is. The article stated that by the time a child is around 15 months old, they will have phased out of two naps per day to only one. For a 2 to 3 year old, nap time could easily last two to three hours each afternoon. But by the time they're 4 to 5 years old, naps could turn into quick catnaps or disappear entirely.

The Baby Sleep Site pointed out that there is a wide range of normal when it comes to toddler naps, so as long as you're sure your toddler is getting enough sleep at night, nap time may be a bit more unpredictable as your child gets older. Although you shouldn't stress if your toddler refuses naps — it could be a phase if they're not truly ready to be done — making sure they get enough sleep both at night and during the day will make for a happier toddler and a (much) happier you.