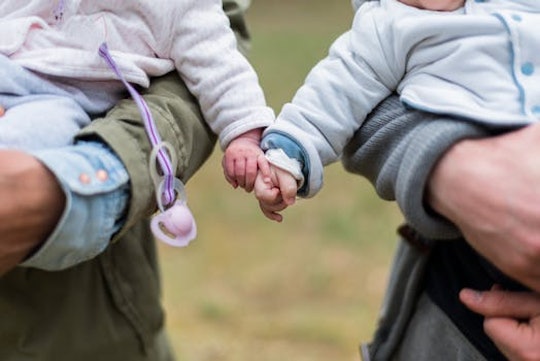 Here's How Often You Should Cut A Baby's Nails

I've rarely been so terrified as I was the first time I cut my baby's fingernails (and yes, I'm counting the nightmare where I'm chased through a corn field by a velociraptor). Her fingers were so dainty, and even with my baby-safe clippers, I worried about nipping her. What's worse, baby nails seem to grow about an inch per night, and seeing little scratches on her face in the morning always made me feel like a bad mom (totally irrational, because all babies get scratches). So, considering the terror-to-growth ratio, how often should you cut a baby's nails?

According to HowStuffWorks Health, this is a common parental question. Your baby's born with nails (but not teeth, for some reason), and they're uber-flexible and soft, which makes them harder to trim. But you can't skip it, because besides the scratches, ingrown nails mean a trip to the pediatrician — meaning your baby will catch a cold, and you won't get any sleep, making it that much harder to safely trim those itsy-bitsy fingernails. See how fast that spirals into bad?

As a rule of thumb, you should cut your baby's fingernails whenever they're long enough to scratch you, themselves, or their playmates, to prevent infection, and also, to keep other moms from judging you. According to MedlinePlus, infant fingernails may need trimming as often as once a week (#NotAllBabies, though. My 8-month-old daughter's face still gets scratchy roughly every 72 hours). Medline recommended filing newborn baby nails with an emery board as the safest method.

Unfortunately, I never had much success with the emery board, what with the squirming — or, if you tackle this project while your baby slumbers, the waking, followed by screaming and squirming. An old lady I met at the park suggested I nibble my daughter's nails — like, with my teeth. I did not do this (despite my usual respect for the wisdom of old-ladies-met-in-the-park), because the human mouth is crawling with germs. Parents seconded my judgment here, and also advised against peeling your baby's nails, because they might tear.

For me, the rounded baby-nail clippers that came in my American Red Cross kit ended this nightmare the fastest, so I usually go with them. The emery board is a nice, safe recommendation, though, so it's probably a good idea to try it out yourself. (Clearly, I'm just not cut out to be a baby manicurist.) However you handle those fast-growing baby claws, you'll likely need to trim them once a week, at least. Just know that this mom, at least, won't judge you if your baby occasionally winds up with a nick on her nose while you're getting the hang of it.