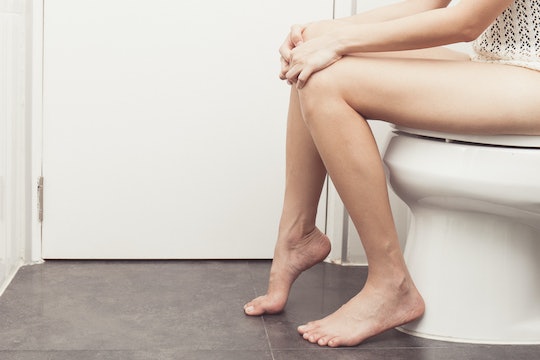 How Often Should You Poop? It All Depends On What's Normal For You

Everyone poops, or so says the popular classic children's book, but unless you're discussing it with your kids or there's something out of the ordinary going on, you probably don't discuss how often you poop with others very regularly — not even with your doctor. So you may be wondering, how often should you poop? Is once a day the right frequency? Is every few days adequate? What's too much and what's not enough? As it happens, it's a little bit more complicated than you might think.

As Healthline reported, there's no specific frequency of how often you should poop in order to be considered regular and healthy. What matters most is what's normal for you, so paying attention to your routine, as gross as you may or may not think that sounds, is essential for you — and your doctor — to know if everything is likely normal or not.

There's a whole range in terms of what's typically considered normal when it comes to how often you're supposed to poop. WebMD reported that your age, diet, how active you are, and more can all influence how regularly you go number two, but that between three times a day to three times a week can all potentially be normal. In an interview with Self, Dr. Felice Schnoll-Sussman, MD, a gastroenterologist and the director of the Jay Monahan Center for Gastrointestinal Health at Weill Cornell Medicine, said that what's normal for you is what's generally normal when it comes to how often you poop.

But, as Greatist noted, if you find yourself going more often than about three times a day or less than at least about three times a week, that could indicate that things aren't quite normal. If you're going too many times a day — or not nearly often enough — talking to your doctor can help you determine if there's something that needs to be done. Eating a healthy diet, drinking plenty of water, and moving every day can help keep you regular if you're worried that you're not going often enough.

Paying attention to how your bowel movements change can give you an idea if there's something potentially amiss or not. But if you notice that your pooping habits change when you're on your period, that doesn't necessarily mean that there's anything wrong. A 2015 paper published in Gastroenterology Report noted that prostaglandin levels are higher when you're on your period, which affects your bowel movements. If your pooping doesn't seem to generally return to what's normal for you upon the conclusion of your period, that could potentially be an indicator that the change is worth bringing up with your doctor.

If you've made any changes to your daily routine lately, that too could be the reason why your pooping habits have changed. The aforementioned article from Self noted that changing sleep habits, workout habits, coffee habits, and more can all potentially have an impact on when and how you poop.

Holding it in instead of going when it's an inopportune time can also make things worse, so avoid doing that if you can. A 1998 study published in Hepatogastroenterology found that women who are avoiding pooping during the day are experiencing more complications associated with bowel movements, like hemorrhoids and constipation.

Ultimately, if you're not all that concerned about your general bathroom routine, you probably don't have anything about which you really need to worry. Taking notice of drastic changes when they occur or talking to your doctor if you're distressed by what's going on should be enough to make sure that you're addressing any potential issues that may arise.

More Like This
How Much Hair Loss Is Normal? 9 Signs You’re Losing Too Much Hair
How Often Should A Toddler Pee When Potty Training? It Depends
What Is RSV?
Can Elderberry Help Prevent Illness In Kids? Doctors Weigh In