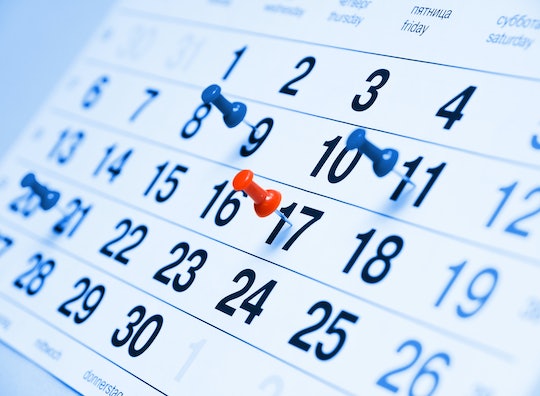 How Often Should You Test For Ovulation?

I have a bit of an obsessive personality. I check my stocks constantly, I watch the pollen charts like my brother watches Sports Center, and I was definitely obsessed with checking for ovulation when I was trying to conceive. But how often should you test for ovulation? Because I probably went overboard.

Ovulation predictor kits (OPKs) are available pretty much everywhere. I'm not kidding when I tell you that at a running store for women near me, they sell them — OPKs are routine for women trying to conceive. When I was trying to conceive, I'll admit to buying the fancy monitor, which in the end was useless as I wasn't really ovulating, but I love a gadget. However, there are much cheaper models on the market, and even disposable tests — but you can check for ovulation without any device, too.

Turns out, the body exhibits its own signs of ovulation that don't require a trip to Walgreens. According to the American Pregnancy Association, everything from tender breasts, to spotting, to wanting to tear your partner's clothing from their bodies with your teeth, are signs of ovulation. It's recommended that you start charting the changes in your body every single day for a period of time so that you can take note and recognize the signals your body is sending you.

That may seem like a lot of rigamarole just to determine if you're a fertile Myrtle on Wednesday or Friday, but knowing your body makes it easier to determine changes, according to the American Pregnancy Association.

If you're more of a hard data kind of lady, then the OPKs are for you. The American Society of Reproductive Medicine completed a study that examined the range of OPKs available on the market, as well as non-mechanical methods for determining ovulation, like checking cervical mucus, and found that the easiest and most cost-effective way to test for ovulation is the urinalysis test kits that work like an at-home pregnancy test. The study concluded that you should test every day between your periods for the first month, and then in future months, test on the days just preceding the predicted date of ovulation based on the previous month, as most kits contain only seven tests. The study also found that some women who rely on only one kit may miss their window because their peak LH surge has fallen either just in or completely outside the window, and the women failed to have intercourse during the prescribed period.

Both sources found that for at least the first month of trying to conceive, you should check every day between periods for the subtle signs of ovulation, and use that as a guide for subsequent months, tracking your body and your urine. It seems like a lot, but when you're trying to get pregnant, you get pretty used to peeing on things. Trust me.

More Like This
Everything You Need To Know About Missionary Sex During Pregnancy
30 Marvelous Baby Boy Names That Start With “M”
I’m A Newly Single Mom. How Do I Get Over My Body Insecurity?
15 Funny Sister Memes For National Sisters Day