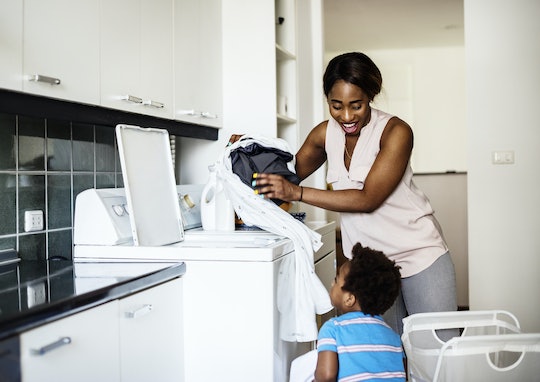 Think of all the grit and grime sprinkled across the body of your child at any given part of the day. Even after they bathe, they likely chase the cat, hug the dog, dig through the houseplants, and crawl beneath their bed, all before climbing in. It makes you wonder what sort of germs, mites, and other bits of yuck are lurking in between their sheets and on their duvets. It's likely a vast variety of microorganisms in a staggering quantity. Given all those creepy crawlies living on your children's beds, how often should you wash your kids' sheets?

The answer seems like it should be simple, and only related to the body that beds down in the sheets, but sheets aren't just keeping you comfortable while you rest. They're also protecting you from the millions of potential dust mites living in your mattress, according to Sleep Advisor. Those mites are harmless on their own. They're just living their best lives by eating the dead skin cells that you shed. But they do create waste (yes, poop), and that waste can be hard on sensitive respiratory systems. The Good Housekeeping Institute wrote that because of these germs and allergens, sheets should be washed weekly.

This is apparently far more frequently than most people are washing their sheets. A study conducted by Mattress Advisor found that on average, most respondents waited around 25 days before cleaning or changing their sheets. And all I have to say to that is, "what?" That is nearly a month of grody build-up on the sheets. Who were those 1,000 respondents who are waiting that long? My guess is that they aren't parents of toddlers who pee the bed once per week, or babies who drool milk in great, illimitable puddles of the viscous remnants of their dinners. Nor were they interviewing people like me, who relish the artificial fragrance of fabric softener and the cool welcome of soft linen.

Judge my love of sweet chemical scents all you want, but I have a thing for fresh sheets. Clean sheet night is one of my favorite nights of the week, and I look forward to climbing in with a joyous anticipation. I will admit that I have passed this strange fixation onto my children, which has led to a great deal of laundry. Even if the Asthma and Allergy Foundation of America hadn't recommended that everyone wash their sheets once per week in water of 130 degrees Fahrenheit, I would still be washing every five to seven days, simply because it feels nice.

Now that my kids are old enough to do their own dang laundry, I make them strip and remake their beds all by themselves. Once they were mature enough, around 5 or 6 years old, the question became less "how often should you wash your kids' sheets," and more "how often should they wash their own?"

If your kid is struggling with re-making the bed, as we all do, there's help. My new favorite sheet sets for myself and my kids are from the company "My Sheets Rock." Their big claim to fame is that their sheets are extremely cooling, but that's not why I like them. I like that at each corner there is a tag that tells you where it goes. A little ribbon that reads "top left" or "top right" and so on. Sorry kids, no more excuses. Get to making your bed and don't whine about it.

Obviously, if your kid is making a mess of their bed, or if you have one of those nights where you don't care how dirty they are, they are going right from the car to their bed, you're going to end up washing their sheets more often. It happens. Kids are gross. As long as they end up being washed on average of once per week, in super hot water, you are good to go.