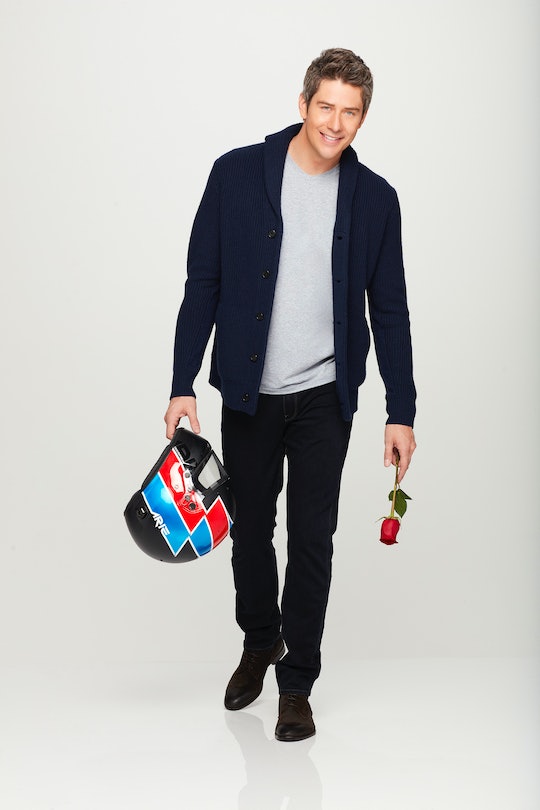 When ABC announced that former contestant of The Bachelorette, Arie Luyendyk Jr., was going to be The Bachelor, there was a mixed reaction to the news. It had been five years since Arie's season aired and the former race car driver wasn't exactly how people remembered, debuting a silver haired look on Good Morning America when the news was announced. With the 36-year-old on the quest for love, people must be wondering how old Arie's contestants are, given his age. Now that their photos and bios have been released, it is certain that these contestants are definitely not as "old" as 36.

29 single women will be competing for Luyendyk's heart when this season of The Bachelor airs on ABC on New Year's Day at 8 p.m. But before you can tune in to see who gets that first impression rose or count the times each contestant interrupts one another for some "private time" with Arie, you can look at their contestant profiles to make predictions. The contestants differ in hair color, profession, and hometown — but their ages are all pretty much in the same range.

The oldest contestant is 33 year old Lauren J., who is a recent master's graduate from New Roads, Louisiana, according to People. The youngest contestants are just 23 — Maquel, a photographer from Orem, Utah and Olivia, a marketing assistant from Chicago, Illinois. This puts both of these contestants at a 13 year age gap with Luyendyk, which is kind of a big discrepancy. There is only one contestant, Rebekah (or Bekah), that doesn't have an age listed, although it is unclear why they would choose to leave this out.

Here is some fun facts about the contestants' ages (because you're probably dying to know more at this point). Only seven of the women are 30 or older (yikes). And only six of the contestants are younger than 25 (that's a little more reassuring). The average age of Luyendyk's women (not including Bekah) is 27 years old. Coincidentally, the median age of the contestants happens to be 27 years old. 27 (tied with 25) also happens to be the age of the contestants that appears the most in Luyendyk's season (there are 5 of each). To put these numbers in comparison, Luyendyk was around 30 years old when he competed to win the heart of Emily Maynard on season eight of The Bachelorette. At now 36 years old, he isn't the oldest bachelor in the history of the show's 22 seasons but he far past the average age (that's 31 years old, according to HuffPost).

But an age discrepancy like Luyendyk or Viall's would never happen on The Bachelorette. Last season, Rachel Lindsay was the oldest Bachelorette ever, at the age of 32, according to Washington Post. But six of her contestants were only her age or older. The rest were younger than her — but her youngest contestant was definitely not 23 — they were 26, which puts them at a 6 year age gap. 13 years, like Arie's contestants, versus 6 years is a major difference.

When you put these numbers into perspective, they seem a little unfair. Each bachelor's age changes year after year, but it seems as if the age of the women competing for the bachelor's heart stays the same. This could because data shows that the older a woman gets, the more attracted she is to people around her own age. Yet, the same data shows that the older a man gets, he is still likely to find someone in their early 20's attractive.

The good news is, according to HuffPost, the average bachelor chooses someone who is six years younger than him. But there is no way of predicting right now who Luyendyk will pick and what her age will be (and if it will skew this average). You will just have to tune in like everyone else when the show airs in the new year.