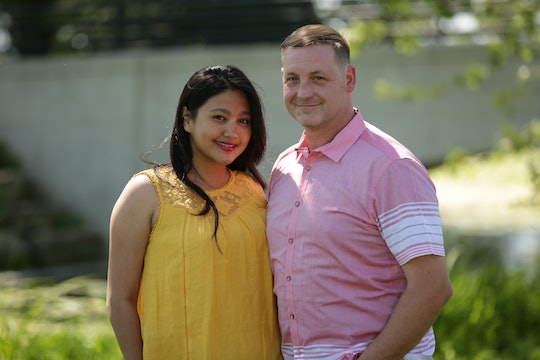 Eric and Leida have had plenty to fight about during this season of 90 Day Fiancé — but issues regarding Eric's daughters have made things even more dramatic. Because the girls have played such a big role in recent episodes of the reality show, fans may be wondering: How old are Eric's daughters on 90 Day Fiance?

Eric and his ex-wife share three daughters: Taneil, who is 21; Natasha (aka Tasha) who is 19; and Jeneka, who is 11. In an earlier episode of 90 Day Fiancé, Eric introduced viewers to his daughters, describing them as "wonderful." Over the course of the season, it's been clear that he has a very different relationship with each of his three daughters. Taneil, the eldest, hasn't appeared on 90 Day Fiancé, to my knowledge. But Tasha, his middle child, has been a pretty prominent character on the reality show.

Eric and Leida's first — and probably most classic — argument of the season began when Leida first entered the apartment that Eric and Tasha shared in Wisconsin. "What the f*ck is this?" Leida asked her fiancé, referring to the mess engulfing the floor. Eric told her that Tasha was responsible for the mess. As you can imagine, that piece of information helped Leida and Tasha get off to a rocky start.

Things continued to fester between Leida and Tasha, with Leida attempting to kick Tasha out on multiple occasions. In an episode a few weeks ago, Leida, Tasha, and Eric sat down together, and Leida calmly asked the 19-year-old to move out. Tasha was annoyed, but managed to keep her cool as well. Tasha told Leida that because she (Tasha) was on the lease, no one had the right to kick her out of the apartment. Also, Tasha said she had been sending in applications for other apartment buildings, and she was still waiting to hear about those. "She may want me out today, but that's not happening," Tasha told the cameras.

The fight escalated in the episode, "No Way Out," when Leida demanded that Tasha move out — and Eric backed his fiancé up. They both yelled at Tasha via speakerphone, telling her it was time to move out.

Another big issue related to Eric's children in the couple's relationship is that the fact that he pays child support for his 11-year-old daughter. 90 Day Fiancé documented not one but two emotional conversations between the couple about this topic during one episode.

"He spend more money to the child support thing than he's spending to me and my son," Leida lamented on the show. "I just want Eric to stop paying it, that's all." She told Eric that she wanted him to give up his parental rights. She even told Eric that she will never be happy as long as he is paying thousands of dollars a year for his daughter. Eric expressed his outrage and told Leida he had no intention of becoming a "deadbeat dad" and giving up his parental rights. Leida literally told Eric she wanted him to prioritize her above his child, and even though he told her she was his number one priority, him choosing to maintain his parental rights was definitely reasonable. Hopefully things start going a little smoother for these two on 90 Day Fiancé now that Tasha has presumably moved out and now that they have discussed the child support topic to death, because their 90 days are almost up.