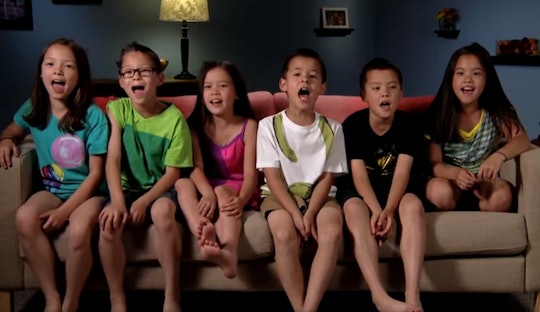 Being a celebrity kid may get you some advantages in life, but one thing it won’t get you out of is school. Even the most well-known of kiddos are getting ready to head back to the classroom, and you may be wondering which of them are at a similar stage to your own kids. For example, how old are the Gosselin sextuplets now and where does that place them in their school careers?

It’s been just a few months since the sextuplets' birthday on May 10, and in 2019, they turned 15 years old, according to a post by their mom Kate Gosselin on Instagram. "Our big celebration of #15 is finally winding down here! We celebrated ALL DAY LONG, beginning with a present at 6:30 am before school!” Kate captioned a photo of Alexis, Aaden, Joel, and Leah.

Not to be outdone, her ex-husband, Jon Gosselin, also posted birthday wishes to his kids on Instagram. Alongside a photo of himself with Hannah and Collin, he wrote: "Happy 15th Birthday Hannah, Collin, Alexis, Aaden, Joel and Leah!!!! Wow I can’t believe you are 15!!! Time is flying by!!! I love you all very much. I wish you the best day ever and I hope you enjoy your birthday celebrations today and this weekend!!! Love always, Dad."

The Gosselins' two oldest daughters are entering their first year of college, according to People, and the sextuplets are going into ninth grade. It’s hard to believe they’ve come so far since they were made famous as six little swaddled bundles.

Collin and Hannah reportedly live with their dad, according to Heavy, a situation that arose after Collin returned home from a school for special needs children. Meanwhile, the rest of the sextuplets and the former couple's 18-year-old twins live with Kate, as E! News reported. It seems that the two children who live with Jon are the only ones he currently has a relationship with, as he told E! News: "The other four [sextuplets] aren't talking to me, but they're talking to Hannah. It's what the kids want to do. If they don't want to talk to me, that's fine, as long as they keep up with their sibling connections."

Back in December, Jon told Entertainment Tonight that while he's estranged from his oldest daughters, he hopes to reconcile. "I hope my relationship with Mady and Cara will get better but they're adults now, so that just kind of hinges on them and I kind of, you know, being estranged from them, I’ve kind of learned to live with it," he told the news outlet last year. "But it’s really up to them to decide what they want to do with that... I kind of left it in their court now since it's been so long. I mean, it is kind of heartbreaking and I do miss them, but everyone grows and matures and understands things... I tried really hard to develop something with them and only time will tell, I guess."

Hopefully those relationships will work themselves out in time, but for now everyone is focused on the task at hand: getting back to school — as high-schoolers this time. And over the next few months, hopefully fans will get a few new photos and updates of the whole Gosselin squad as freshmen.