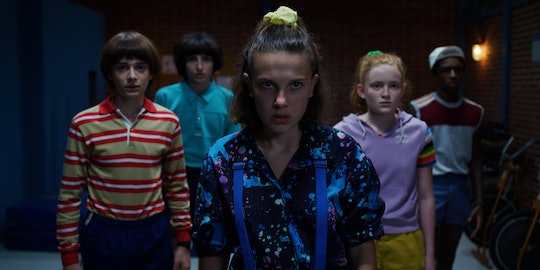 The 'Stranger Things' Kids Are Growing Up Fast

Stranger Things 3 drops Jul. 4 on Netflix, offering the perfect escape from an overabundance of family time on a holiday weekend, should you need it. The latest season jumps forward in time one year to 1985, like the seasons before it; Stranger Things was set in 1983, and Stranger Things 2 was set in 1984. Since the cast looks noticeably older, viewers may be wondering how old the Stranger Things kids are now, especially as more and more of them find success on their own outside the show.

Stranger Things served as most of the kid cast members' breakout roles, with more established adult actors like Winona Ryder and David Harbour bringing some star power to the sleeper hit. But increasingly, the kids are starting to break out on their own. Millie Bobby Brown is carving out an action star career for herself in the Godzilla franchise. Shannon Purser went on to land series regular roles on NBC's Rise an The CW's Riverdale before starring opposite Noah Centineo in her own Netflix romcom Sierra Burgess Is a Loser. And Finn Wolfhard has roles in the upcoming film adaptation of The Goldfinch as well as Ghostbusters 2020. So, needless to say, the cast is killing it and the Duffer Brothers unearthed some serious talent. But read on to find out how old everyone is now, and learn more about how much they've accomplished since being discovered.