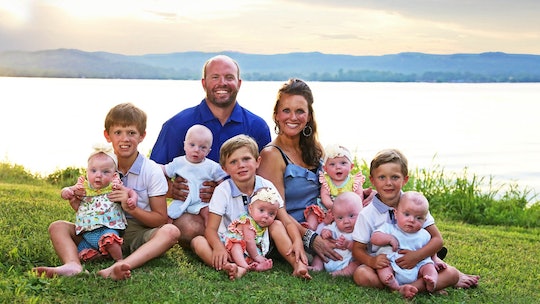 Here's How Old The Waldrop Twins Are

This week's episode of Sweet Home Sextuplets finds Courtney Waldrop wrangling her older kids, who are playing outside during an impending tornado, while taking care of her six babies indoors. Nine-year-old Saylor, her eldest son, took charge to help get the rest of the kids inside, but viewers may be wondering: how old are the Waldrop twins, Wales and Bridge? Courtney's middle children were born in January 2012 with the help of fertility treatments, which makes them six years old.

After the birth of Saylor, Courtney and her husband Eric suffered several miscarriages when trying to conceive again. "It was devastating because I can get pregnant so easily, I just can’t hold on to them," Courtney told People when the sextuplets were first born. So they turned to fertility treatments and soon conceived Wales and Bridge, carrying the twins to term. After they were born, the Waldrops suffered yet another miscarriage in their quest for just one more baby. But eventually, Courtney conceived sextuplets, carried them to 30 weeks, and gave birth via C-section with the help of a 40-person labor and delivery team at Huntsville Hospital for Women & Children.

Courtney admitted during a press conference after giving birth that one of the hardest parts of being pregnant with sextuplets — the first born in the state of Alabama since 2011 — was trying to juggle parenting three kids with all that bed rest. "It was really nothing else than just the challenge of trying to be still a good mom for them and grow these six babies and get them where they needed to be," she said.

Sweet Home Sextuplets chronicles the Waldrops' lives as they go from a family of five to a family of 11 literally overnight, but as viewers can see from the show, Courtney has round the clock help. A team of volunteers assembled within days of all six babies coming home from the hospital and offered Courtney a 24-hour schedule of assistant caregivers. The babies, fraternal sextuplets comprised of three boys named Layke, Blu, and Tag, and three girls named Rivers, Rawlings, and Rayne, have plenty of extra support to see them through their infancy.

Born December 11th, the babies are coming up on their first birthdays, but in the timeline of Sweet Home Sextuplets, they just took their six-month photos — pretty much an unmitigated disaster, thanks to a very hot Alabama summer, magic hour being their fussiest time of day, and, well, poop.

Courtney and Eric, who met in eighth grade and have been together ever since, seem like a rock solid couple, and even the photographer who documented their delivery noticed it. "It was very quick and fast. It was just so surreal," Courtney Neill Williams, who photographed the delivery, told Today. "When the first girl was born, Courtney's husband leaned and kissed her on the forehead and said, 'You've got your first little girl.' He was just very comforting to her and held her hand the whole time."