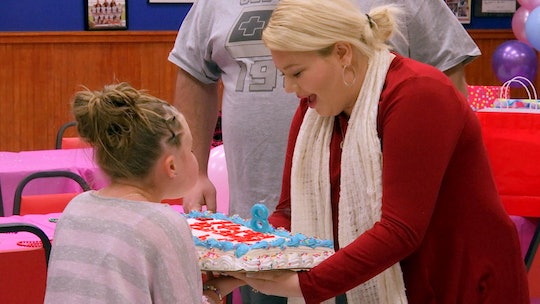 Amber's Daughter Leah Is Growing Up On 'Teen Mom OG'

When Amber Portwood first appeared on MTV's 16 and Pregnant, she was a teenager dealing with an unexpected pregnancy. A lot has changed in her life since then, and Teen Mom has been documenting it every step of the way. Viewers have seen all the biggest moments in Amber's life and they've also watched her daughter grow up before their very eyes. But how old is Amber Portwood's daughter Leah on Teen Mom OG?

Leah Shirley was born on Nov. 12, 2008. Those of us who remember that episode of 16 & Pregnant will be mildly shocked to realize she just turned 10 years old. Of course, she's been walking and talking and generally being a whole human being on Teen Mom for years, but it's still wild to think a decade has passed. And now Leah can be a little more vocal about her feelings and opinions. While talking to Us Weekly, Amber explained that the custody agreement has improved since Leah can make decisions about who she wants to stay with and when, which Amber respects. "Some weekends [Leah] wants to go and spend the night with her friends or do something else. I mean, she’s a kid so I can’t really get mad at that," Amber told Us Weekly.

She continued, "But I do miss her a lot and I do explain to her that, even though she's young, 'Mommy still wants to see you more' and things like that. She understands, but she's a kid... As long as she knows that I love her and that we spend time together... that's really all that matters. As long as she's happy."

Amber wished Leah a happy birthday on Instagram when she turned the big 1-0, but Leah is a regular fixture on Amber's social media. Whether they're taking a trip together to the Indiana Fear Farm, promoting new episodes of Teen Mom, or just taking a mother-daughter selfie, Leah often appears in Amber's posts. And these days she has a new photo partner: Amber's newborn son James, whom she welcomed with partner Andrew Glennon on May 8 of this year.

James isn't Leah's only younger sibling, either. She also has a baby sister named Emilee, who is Gary's daughter with his wife Kristina. The blended families haven't always been super close, but seem to get along well now. Gary offered Amber well wishes on Twitter after James was born, stating that he wanted the best for them because "Leah deserves both parents working together."

Amber appeared to agree during her interview with Us Weekly. She said that it was a good thing that Leah had "many people around her that she’s able to talk to and confide in if anything does happen." Even though there may have been ups and downs getting there, the extended Portwood-Shirley-Glennon family can all be there for Leah. Amber added:

If I'm not there, at least another woman is there to be that motherly figure for Leah because that's what Leah needs. She has a good family around her. And even Andrew being so new, he really does care about Leah and thinks she’s just a neat kid, you know, cause she really is. She's smart, she's artistic and [Gary] loves art. She's just a neat kid to him.

It's hard to believe that Leah isn't a baby anymore, but unfortunately that's just how time works. Before viewers know it, she'll be marching off to college and collecting her retirement fund.