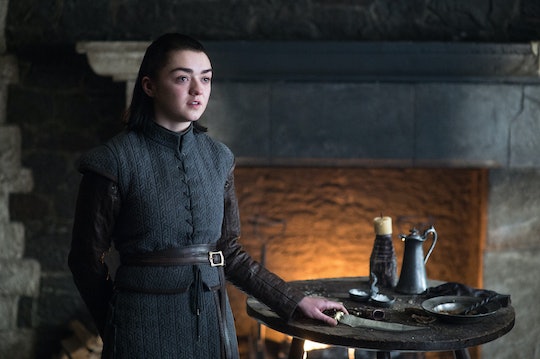 Arya Stark's coming of age on Game of Thrones has mostly been marked by some rather unrelatable experiences; she left her childhood behind so that she could become a skilled assassin bent on revenge. Not exactly typical. But in Season 8, Episode 2, she experienced one of the more common aspects of growing up: she had sex for the first time. Some fans celebrated her hook-up with Gendry, but others were left uneasy, wondering just how old Arya Stark is on Game of Thrones. Was it inappropriate for her to be having a sex scene?

All of the characters are a little younger in George R. R. Martin's A Song of Ice and Fire series. In the books, Arya is 9 years old, but in the first season of Game of Thrones, she was 11. If every season has spanned the course of a year in show, then that makes Arya 18 years old. That seems to have been confirmed by HBO UK's Twitter account, which posted a tweet listing all the things someone should do in Westeros by the time they turn 18. Everything on it was Arya-specific, like having a kill list, being blinded for a period of time, and committing a few murders. So there you have it: Arya is 18, though actress Maisie Williams is 22.

In Episode 2, Arya decided that she wanted to know what sex was like before she put her life on the line again in the coming war against the White Walkers. Since she'd recently crossed paths with old crush Gendry, it seemed like the opportunity was too good to pass up. While Arya and Gendry have a dedicated shipper base who celebrated them getting together with countless gifs on Twitter, there was another side to the conversation. Worry arose over whether or not it was creepy for Arya to have a sex scene, and specifically one with Gendry.

Gendry is one of a few men in Westeros who is not actively garbage; he's kind, well-intentioned, and he's shown the basic respect for other people's boundaries that should be par for the course. He is older than Arya, though it's not clear how much older; in the books they're five years apart, while actor Joe Dempsie has a decade on Williams. They also met when she was a kid, which perhaps adds an element of squick for some people. But was there this much concern over Arya's age when she was traveling the world mostly alone, pledging herself to an anonymous murder cult, or striking names off her kill list with ease?

The sex scene itself was not especially graphic by Game of Thrones standards, with minor nudity and a cut before the actual action. And ultimately, it was more about Arya's journey as a character than anything else. As Williams told Entertainment Weekly, it was a moment for Arya to feel human again after years spent suppressing her feelings so that she could survive.

"It was really interesting because it's a very human relationship for Arya," Williams said. "This is something she's stayed away from, an emotion we've never really seen her engage with." Arya has never quite accepted the possibility of her own death, but if it was going to happen, then she didn't want to regret missing out on anything she wanted to experience. Williams added, "It's interesting to see Arya be a bit more human, speak more normally about things people are scared of."

No one is telling you to root for a relationship if it makes you uncomfortable. But sex scenes on Game of Thrones have been so skewed for so long, often prioritizing the men and relegating the women to objects or victims without their own point of view. This was a rare instance of a woman having a positive sexual experience that allowed her to be in complete control from beginning to end. And for someone like Arya, who has defined herself by a lack of feeling out of necessity, it was one more aspect of her coming back to herself now that she's home. She's just doing what a lot of young women do, for once. She's figuring out who she is now.