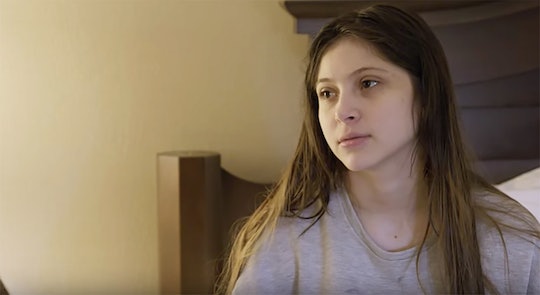 How Old Is Brianna Jaramillo’s Son? The Little Guy Is Growing At Warp Speed

Although Jaramillo didn't expect to get pregnant at 17 years old, she was thrilled to become a mom for the first time. The only issue? Jaramillo's son was born without a left forearm and hand, a disability she wasn't initially prepared for.

Jaramillo eventually realized, however, that the disability was something she and Braeson could overcome together. “He’s going to adjust to living with it because he was born with it," she added. "It’s not like he had an arm and lost it. He’s going to learn to do everything that we do but without it.”

And five months after Jaramillo gave birth to Braeson in August 2017, she wrote on Instagram: "He is my whole world 🌎 and I love him with all my heart ❤️."

Cut to October, and Braeson is now a thriving 1-year-old kiddo. To commemorate Braeson's special milestone in August, Jaramillo wrote:

Braeson Messiah Jaramillo. Was born today at 1:20 am. I have never known true love and happiness until I had my son. Braeson mommy loves you very much and I will do anything to see you smile 💖 happy 1st birthday pumpkin 😘( sorry I haven’t been posting lately just been busy) I will post more pics of his birthday when I get home 😊 thank you all for your support and watching Braeson grow and learn with me.

As for Braeson's first birthday party? It went really well. "Baby Braesons first birthday was amazing. 💖😍," Jaramillo said on Instagram. "Thank you to everyone to wished him a happy birthday😘 xoxo."

Now that Braeson is officially 1, he's starting to develop a personality with likes and dislikes. The cute kid loves the water, reading, and the movie Moana, according to Jaramillo's Instagram account.

As for milestones, Braeson is learning new things every day. "Braeson learned how to stand up in the pack in play on his own 👏🏼💖," Jaramillo wrote in July.

Braeson is also surrounded by a lot of people who love him, including his grandma, aunt, and Jaramillo's boyfriend, Robert Reams. Although it's not clear if the couple will make things work in the end, it's obvious Reams adores Braeson. "Love braeson so much 💘💘💯👌," Reams captioned an August shot of the baby.

Now that Season 2 of Teen Mom: Young & Pregnant is officially here, it will be interesting to see how Braeson manages his disability, as well as the evolution of his personality. And while Braeson's journey is still unwritten, there's no question this precious 1-year-old has a lot of people cheering him on.