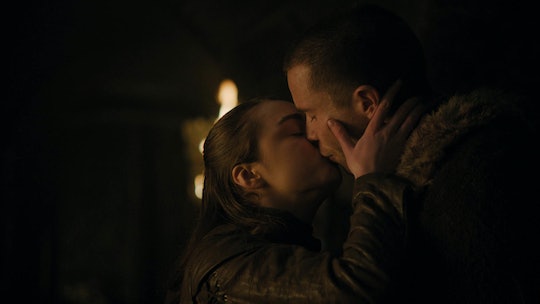 Episode 2 of Game of Thrones' final season served as one last bonding sesh between characters right before what most of them anticipate will be the end of the world. Arya, on the eve of her first official battle, decided she didn't want to go out a virgin, so she politely requested Gendry do her a solid. He bashfully agreed but their love scene has fans wondering how old Gendry is on Game of Thrones. Even though Arya is of perfectly reasonable sex-having age — especially in medieval fantasy time — viewers were still having a lot of ~feelings~ about seeing a character they were first introduced to as an 11-year-old have sex for the first time.

While Arya may still feel like a child, especially if you've done a series rewatch recently and have her baby face fresh in your mind, seven years have technically elapsed in the Game of Thrones universe since Season 1. That makes Arya, who announced that she was 11 in Season 1, 18 years old. (Maisie Williams, the actress who plays her, turned 22 just before Season 8 premiered.) As for Gendry, the math is a bit more complicated.

PopSugar broke it all down, but in the books, Gendry is explicitly said to be five years older than Arya. That would make him 16 in Season 1 and 23 in The Great Devirginizing. Pretty reasonable — again, especially for the time period. However, in the second season of Game of Thrones, Gendry says that he's worked for blacksmith Tobho Mott for 10 years. PopSugar estimates that this makes him a little older than he's said to be in the books — about 20 in Season 1, which would make him 27 now. Eighteen and 27 is a slightly more significant age gap, but still not outlandish in Westerosi terms, not by a long shot.

Plus, I'm not sure if mentioning that he worked for a blacksmith really ages him up much at all. That math assumes that he was about 11 when he started working as a blacksmith's apprentice. But viewers know Gendry grew up an orphan in the slums of Flea Bottom. He was probably pretty mature and capable very early on in life to survive that, so I can totally imagine him holding his own as an apprentice at an age younger than 11. The fact that he's such a skillful blacksmith only supports this — the younger he would have started, the better he'd be at it.

Both of these scenarios would still make Gendry more than five years older than Arya. But in terms of developmental maturity, the pair seem well-matched. Arya understandably seems to want someone with a little more experience than her, as evidenced by her hilariously grilling Gendry on how many women he's slept with. But his modest answer of three proves he isn't exactly a lothario on, say, Bronn's level. As far as she's concerned, the end of the world is coming, her childhood friend has grown up into a ripped, hammer-wielding blacksmith, and the pair have legitimately great chemistry. He feels like a natural choice for the occasion and their sweet, tasteful sex scene was one of the few moments of levity in an otherwise heavy episode.