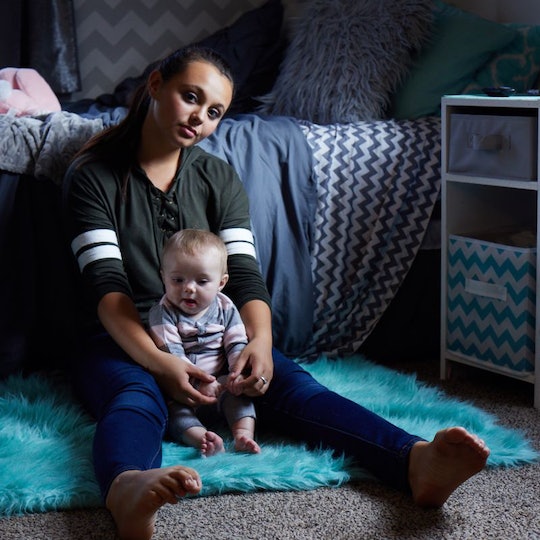 Lexus From 'Unexpected' Has Come A Long Way

When viewers first met Lexus on TLC’s Unexpected, she was a teen facing pregnancy and motherhood with her boyfriend Shayden. Her relationship with Shayden was rocky, but she tried her best to make things work. So how old is Lexus from Unexpected? After some initial struggles, the 17-year old mom is pulling her life together.

When Lexus started her journey on Unexpected, she was 15 and her baby’s father, Shayden, was 17. Her mom Kelsey, who was a teen mom herself, was hesitant about Lexus’ pregnancy, and wasn’t sure that the teens could handle parenthood. However, according to their social media posts and a report from Newsweek, the young couple has reconciled and are doing their best to raise their baby together.

In an exclusive interview, Lexus and Shayden told Newsweek that they are happier than ever and may even tie the knot in the next few years. “We want to get married,” said Shayden, “We plan on waiting until Lexus is around 19 or 20, so we still have some time.” The couple is also planning on moving in together somewhere where they can easily find employment. “Shayden and I plan on getting our own place about a month before I turn 18,” added Lexus, “We plan on moving out of our hometown and closer to a place that has more job opportunities.”

It looks like Shayden and Lexus are past their relationship hurdles, but they've had a harder time winning over Kelsey. In the trailer for Season 2, Kelsey said she wanted custody of Lexus’s daughter Scarlett, because both Shayden and Lexus were unemployed at the time. “It makes me very upset to hear my mom say she wanted to take custody,” Lexus told Newsweek. “Shayden and I didn’t have jobs, Shayden was trying to find one, I was not. My mom didn’t like that we were being irresponsible and she wanted custody. In my opinion, it was never anything so serious that she should’ve ever threatened to do that.”

On Kelsey's Instagram, she has posted plenty of pics of Scarlett and Lexus, which shows that she’s still very much a part of their lives.

On social media, Lexus has posted tons of adoring photos of Scarlett and Shayden, with one post commemorating the couple’s two years together. “Two years with you, Shayden. I cannot believe we have made it this far,” she captioned one slideshow of their special moments. “Our relationship has grown so much just in the last few months — I can’t wait to have many more years with you & our beautiful baby girl.” On his Instagram page, Shayden posted a picture of the two for their anniversary as well, captioning the picture, “Happy 2 year anniversary baby, I'm so speechless like I don't know what I could possibly say that could express myself 100 percent, you are a blessing in my life that I wouldn't give back for the world, I love you so much Lexus.”

Going through a a big life change like motherhood can be hard for anyone, but when you are a teen, the challenges can be even harder. Luckily, Lexus and her family have found a way to make things work, and Unexpected fans continue to wish her all the best.