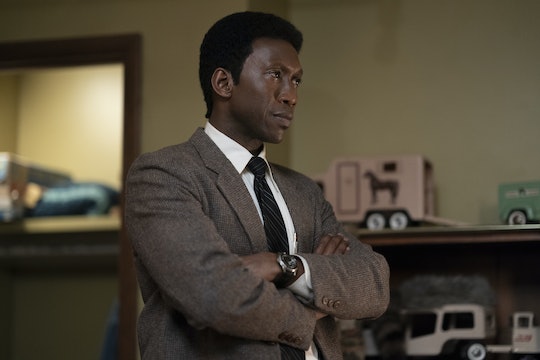 Mahershala Ali has had an impressive amount of success in the last few years. He won a Golden Globe for his performance in Green Book, which followed on the heels of an Oscar for Moonlight in 2017 and an Emmy nomination for House of Cards in 2016. His work is critically acclaimed and beloved by audiences, but it took a long time for his genius in front of the camera to be recognized. Especially considering the age ranges of his character in True Detective, you may wonder: How old is Mahershala Ali?

Ali was born on Feb. 16, 1974 (making him an Aquarius for all curious zodiac enthusiasts), so he'll be turning 45 years old in just a month. Before that, the third season of True Detective premieres on HBO on Jan. 13, with Ali in the lead role. He plays a detective named Wayne Hays in a story that spans decades; Hays investigates the disappearance of two children in 1980, but the case reverberates through the rest of his life.

Wayne is 35 years old when the kids go missing, but the show catches up with him again in 1990 when he's 45 and in 2015 when he's 70. Makeup helps Ali transition between the different periods in Wayne's life, but his acting skills will do just as much to help him play both younger and older than his real age.

Splitting Wayne's life into three eras made him feel like three different characters to Ali. While talking to USA Today, Ali explained that Wayne was especially different once he reached age 70 and began to struggle with the onset of dementia. It took five hours in the makeup trailer to age Ali up a few decades, but the changes in Wayne's personality seemed more significant. "As he ages and his mind begins to deteriorate, his heart opens and he becomes more affectionate, more emotional, more loving," Ali said.

Series creator Nic Pizzolatto praised Ali's performance in an interview with Entertainment Weekly. He said Ali's work on the show blew him away, with new nuances being revealed to Pizzolatto every time he watched the show. "I really think what he does here — as far as degree of difficulty for an actor, and how he pulled it off — is just amazing," he said, adding that Ali was "doing stuff I've never seen before."

Ali almost didn't play Wayne, however. He was initially offered a supporting part (which ultimately went to Stephen Dorff), but he lobbied for the lead role. Pizzolatto credits Ali with allowing him to discover new sides to the character and enhance the story in ways he hadn't imagined previously. Pizzolatto explained, "I felt like he gave me a great gift that opened up my work and allowed me the freedom of imagination that I had been unknowingly been previously constricting myself."

The story jumping from decade to decade allows Ali to show off his full range as an actor. Exploring Wayne at various junctures in his life may provide audiences with a fuller understanding of the character — on top of impressing everyone with how successfully Ali can pull off being both older and younger than his 44 years.