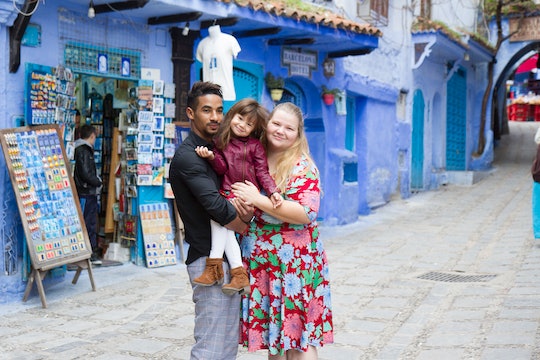 Nicole's Daughter May Is Growing Up On '90 Day Fiance: Happily Ever After'

Fans of 90 Day Fiancé have been following the story of Nicole and Azan's troubled romance since Season 4. When they first met online, Nicole was a 21-year-old single mom living in Florida with a daughter under two years old. A lot has changed in the years since then; most notably, May is growing up. But how old is Nicole's daughter May on 90 Day Fiancé: Happily Ever After?

Happily Ever After? is a spinoff of the main series that follows a few couples after the events of 90 Day Fiancé. It airs every Sunday on TLC, and Nicole and Azan are back to continue working out a way to be together. They've repeatedly delayed their nuptials for one reason or another, and by this point they've been together long enough that May is no longer the baby she once was. She's still a little kid, but she's aging at an alarming rate right before the audience's eyes.

When Nicole and Azan first joined the show, May was 20 months old; that was in 2016. That means in 2019, depending on where her birthday falls in the year, May is now around five years old. She's basically a person! Before you know it, she'll have a job, a car, maybe even a retirement fund.

Nicole has captured nearly every minute of May growing up on social media. Even when the TLC cameras aren't rolling, she's making sure that May's childhood has been recorded for posterity on Instagram. She shares holiday photos, joint pictures, and throwbacks to the very recent past. In December 2018, she posted a picture of May at nine days old, making it abundantly clear just how much has happened in a few short years. One minute you're rocking mittens so you can't scratch yourself by accident; the next you're a walking, talking kid with shockingly good selfie skills.

Nearly all of Nicole's Instagram is devoted to her family, including several pictures of Azan and May together. May has accompanied Nicole on trips to Morocco to visit Azan as well, which was dutifully celebrated on Instagram. For the caption on her post about their 2018 visit, Nicole wrote, "Being able to travel with you and make these amazing memories mean everything to me! [sic]"

Though the family looks happy together on social media, there's been some indication that Happily Ever After? earned the question mark of its title. Nicole and Azan previously pushed back their wedding to open a beauty store in Morocco that never actually came to fruition. Now they're living in separate places again and, according to E! News, Nicole's family is still trying to convince her not to trust Azan. They believe he might be taking advantage of her.

Elle speculated that Nicole and May might be headed back to Morocco to reunite with Azan this season. Whether or not that results in Nicole and Azan finally tying the knot remains to be seen. Viewers can surely expect lots of drama, as is the show's trademark, but hopefully May will get to take in the sights without too much fuss. I'm sure, as basically an adult, that she has a very busy schedule to stick to.