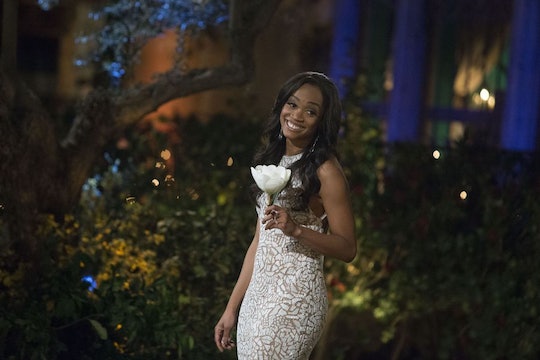 How Old Is Rachel Lindsay On 'The Bachelorette'?

To say that Bachelor Nation fans love the newest Bachelorette would be an understatement. Ever since she first stepped out of that limo to greet Nick Viall on The Bachelor, viewers became hooked. She's smart, she's fun, and she's genuine. Not to mention the fact that she's a badass lawyer. Basically, this person can do no wrong, which makes us all the more eager to see her get a happily ever after. But how old is Rachel Lindsay on The Bachelorette? She's at a point in her life where she's ready to settle down and find love.

According to her official ABC Bachelorette bio, Rachel is now 32 years old, making her slightly older than some of the other Bachelorettes to grace the mansion — former Bachelorette JoJo Fletcher was only 25 years old when she embarked on her quest for love. But when it comes right down to it, the age of each given Bachelor or Bachelorette doesn't necessarily matter all that much. Sure, it'd be easy to say that those who are older are more serious about settling down. But at the same time, each individual is completely different, so making assumptions on someone's age could be misleading. It is, after all, just a number.

Considering, though, that we're already quite familiar with Rachel back from when she was on Nick's season, we don't need to know her age to guess about her maturity level. We know how serious she is about finding love. She was a major contender for Nick's heart last season. In fact, she was even the one to win Nick's first impression rose during the premiere. And Nick's feelings for her only continued to grow as the season progressed. Unfortunately, he didn't end up picking her (his mistake), but that leaves her with the opportunity to become the pursued rather than the pursuer.

Now she gets to decide who is worthy of her time and attention, so it'll definitely be interesting to see her on the opposite side of things this time around. It's not like viewers aren't familiar with this sort of change-up. JoJo was on Ben Higgins' season of The Bachelor before she, in turn, became the next Bachelorette. But Rachel in particular is someone I'd love to see find a love that lasts long after the season comes to an end. As for whether that will happen, fans will just have to tune in and see.