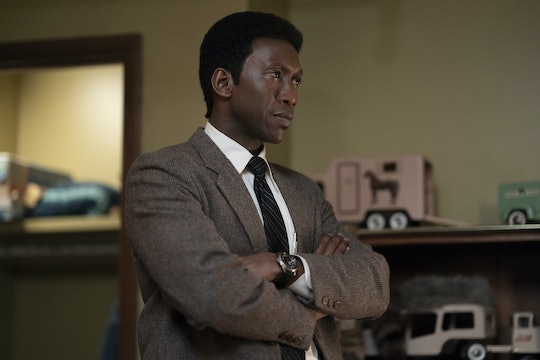 Season 3 of True Detective is on the horizon, and the anthology series has paid attention to its critical reception over the past two seasons. After suffering a widely panned Season 2, series creator Nic Pizzolatto is returning to some of what made Season 1 so addictive, like time looped storytelling for one thing. So viewers tuning in for the new season may be wondering of its lead character: how old is Wayne in True Detective? This season plays out over 3 different time periods, so its star, Mahershala Ali, really got to exercise his acting chops.

The story isn't told chronologically, but it begins in 1980, when Wayne Hays (Ali) and his partner, Roland West, (played by Stephen Dorff) investigate a missing persons case. A 12-year-old boy and his 10-year-old sister go out for a bike ride in a sleepy town in the Ozarks and are never seen again. Over the course of the investigation, Wayne meets Amelia, the boy's English teacher, and the two begin a flirtation. Fast-forward to 1990, and Wayne and Amelia are married with two children. A new piece of evidence emerges in the case, upending the once-satisfying conclusion Wayne and Roland had come to about it. Finally, in 2015, Wayne is depicted as an elderly widower suffering the onset of dementia. We know that in this timeline, Wayne is around 70. That would put him around his 40s in the 1990 timeline, and around his 30s in the 1980 timeline. Ali plays Wayne in all three timelines.

In his old age, Wayne and his partner Roland have grown apart over a falling out, but the series doesn't make clear right away what happened between them. It also doesn't reveal a ton of details about how the case was solved in earlier decades or what the new evidence might mean. When a true crime documentary filmmaker comes to visit Wayne in his 70s, his interest in the case is reignited, but dementia makes his memories unreliable. Armed with a nonfiction novel his late wife wrote about the case to help him, he decides to seek out Roland and try to piece together the evidence once and for all.

For his part, Pizzolatto takes accountability for the show's previously uneven critical reception and sounds pretty humble about trying to get the series back on track. He told USA Today in an interview ahead of the Season 3 premiere:

“I understood there was a lot of stuff in Season 2 that people hadn’t wanted to see based on Season 1...I wanted something that was less sensationalistically violent and more closely tied to the idea of family, because so much of this case would ultimately impact (Hays’) family and haunt the family in its own way."