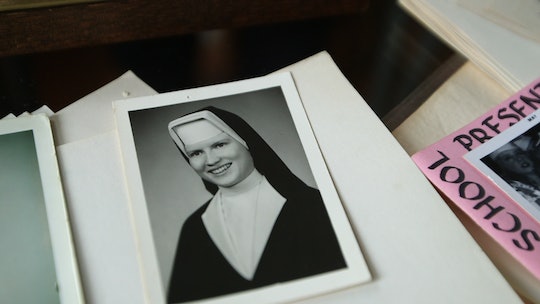 The true-crime docuseries slate has been a little crowded following the popularity of projects like Serial, The Jinx, and Making a Murderer, but Netflix's latest addition promises to capture all the intrigue of the genre's very best. The Keepers follows the story of Sister Cathy Ann Cesnik, a Batimore-area nun and schoolteacher who was murdered in 1969. The case ran cold without ever being solved and theories abound regarding a possible sex abuse scandal in connection to her death. She was tragically young when she disappeared, which may prompt some fans to wonder: how old was Sister Cathy when she died?

Having entered the convent as a postulate right after her own high school graduation, Cesnik finished her study in seven years and took her final vows in 1967. Just two years later, at age 26, she was murdered. Cesnik had been teaching at Archbishop Keough High School, which was a newly opened school in the parish, since 1965. She taught drama and English to students there for four years before transferring to a public school as part of her exclaustration — a temporary break from convent life for nuns, in which Cesnik was free to live on her own, forego wearing her habit, and teach in a "missionary" capacity at a public school.

Cesnik had reportedly become emotionally distressed during her post at Keough, and had requested the break in response. Former students of hers later revealed that they had been confiding in her allegations of sexual abuse at the hands of Keough's guidance counselor, Father A. Joseph Maskell (who denied initial accusations until his death in 2001). Those close to her at the time surmised that she had left Keough and the convent to grapple with how to handle the abuse allegations. Former students continued to visit her at her new apartment, which she shared with a fellow nun named Sister Helen Russell Phillips. Some speculate that students were continuing to come to her with stories of the abuse they suffered, seeking guidance.

It was while she was teaching at her new public school, Western High, that Sister Cathy disappeared. Her body was discovered two months later at a nearby garbage dump. In 1994, a sexual abuse lawsuit was brought against Father Maskell by 30 victims demanding a $40 million settlement. The case was dismissed on a technicality, but the Archdiocese investigated Maskell on their own, eventually relieving him of his duties at the parish where he worked and formally "revoking his faculties" as a priest, though Maskell was never convicted.

The Keepers premieres on Netflix May 19.