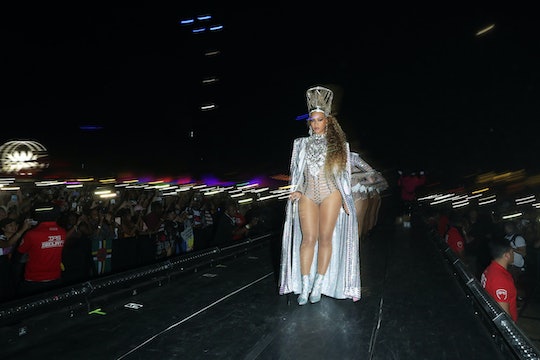 The fact that Homecoming — Beyoncé's new documentary with Netflix — even exists is a pretty amazing gift in itself. But the notoriously private singer reveals some details about her struggle while preparing for her historic 2018 Coachella performance that might empower some of her fans who are mamas. She was supposed to perform at the music festival in 2017, but she unexpectedly got pregnant with Rumi and Sir. So, naturally your next question is: "how old were Beyoncé's twins during Homecoming?" Sit down and take a breath before you read on because the complete answer is pretty amazing.

The twins were born on Jun. 13, 2017 and the first Coachella performance was on Apr. 14, 2018. That makes them exactly 10 months and one day old on the day of that first performance which, in case you were wondering, is about 7,320 hours old. It's not just me who's mind is blown by that, right? I mean that's only four digits.

But that's not the complete answer, because the documentary chronicles the journey of creating the entire Coachella show. So, I knew they were probably a lot younger than that when she started rehearsing again. The first exact date I could calculate postpartum was "115 days before Coachella." So, I did math that took a few more calculators and figured out that they were around six months when she was rehearsing again (4560 hours, if you're curious) .

But don't kid yourself, this amazing feat was hard for Queen Bey. "In the beginning it was so many muscle spasms. Just, internally, my body was not connected. My mind was not there. My mind wanted to be with my children. What people don’t see is the sacrifice. I would dance, and go off to the trailer, and breast-feed the babies, and the days I could, I would bring the children," she said.

Beyonce also revealed that she had a very difficult birthing experience with the twins. "I developed toxemia, preeclampsia and in the womb, one of my babies' heartbeat paused a few times, so I had to get an emergency C-section." So, her road back to the stage after having the babies was probably more difficult than most of us can imagine.

Having kids changes a person, and Beyoncé is not interested in going back to the person she was before having them. "I just feel like I'm just a new woman in a new chapter of my life and I'm not even trying to be who I was. It's so beautiful that children do that to you."

She admits she probably won't push herself like she did while preparing for Coachella ever again. It taught her that she could endure more than she thought she could, but her new life is all about balance. "I'm just trying to figure out how to balance being the mother of a six year old and twins that need me and giving myself creativity," she said. "Physically, it was a lot to juggle. It's like, before I could rehearse 15 hours straight. I have children, I have a husband, I have to take care of my body."

So while Beyoncé may never put on another performance like that in this lifetime, at least everyone can enjoy Beychella forever thanks to this doc.