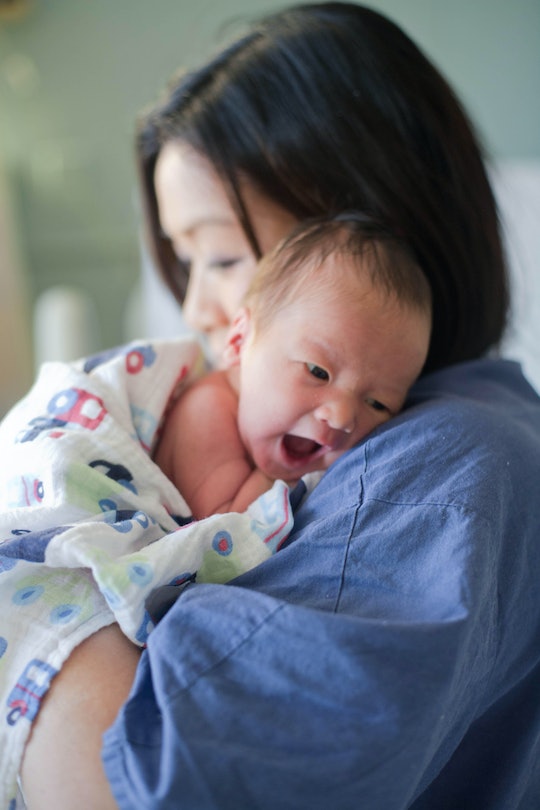 Over the course of the last decade, the number of women who purposefully choose to become single parents has grown. As a result, their stories are becoming more and more common, thus helping to clear up a number of misconceptions about family planning in today's modern age. In its latest episode, the Pregnantish podcast dives into how one single mom by choice settled on her sperm donor while wearing a disposable paper gown and sitting in her doctor's office.

Although their motivations and journeys to parenthood often look different, single mothers by choice, or SMBC, are considered to be women who have opted to pursue parenthood alone through adoption, a sperm donor, or other fertility treatments. For the moment, there aren't any concrete statistics regarding exactly how many single mothers by choice exist in the United States. However, the number is likely to be in the tens of thousands as evidenced by the fact that Single Mothers by Choice, a nationwide support organization for SMBC, currently boasts more than 30,000 members.

In the latest Pregnantish podcast, Pregnantish founder and editor-in-chief Andrea Syrtash, sat down with Selena, a woman who became a single mom by choice in her mid to late 30s after leaving a marriage to someone who wasn't ready for children. "I think I wanted to become a mother since childhood really," Selena told Syrtash. "That was something that I always thought would happen, and would happen really young for me."

After getting divorced at 31, Selena said she spent the next five years dating, furiously trying to find a partner to have or adopt children with, to no avail. Eventually, she settled on the idea of pursuing motherhood alone with the use of an anonymous sperm donor. For cost purposes, Selena said she opted to go with a clinic that had a smaller number of donors but could provide both the donor sperm and the insemination treatment.

To help her select a donor, the clinic provided very basic three-page profiles on each donor for free. These profiles included things like height, ethnicity, education level, and a brief health history. For $25 Selena could purchase a copy of a donor's extended 25-page profile. She bought three different donors' extended profiles and turned to a good friend for help in narrowing them down to one.

After three insemination treatments and no pregnancy, Selena was still determined to be a SMBC. But while sitting in a clinic exam room waiting undressed and draped in a paper gown for her fourth insemination treatment Selena was hit with a curveball: her donor of choice was no longer available. "The nurse came in, and she put her hands on the table, and she's like, 'I'm sorry, I forgot to tell you something ... Your donor's no longer available,'" Selena recounted. "And then she's like, 'How about number so-and-so?' She just blurted out a number."

At first, Selena was taken aback by the nurse's seemingly nonchalant attitude. "I was like, 'What? I took all of these months to decide on who I was gonna choose and now you're like, 'While you're sitting, how about this guy?'" she said. Seeing her shock, Selena said the nurse offered to go pull three-page profiles for four donors.

It was then, however, that something pushed Selena to just trust the nurse's recommendations and put her hope for a child in the universe's hands. "In the moment, I was like, 'You know what, this clinic knows these guys, maybe I should just go with it,'" Selena told Syrtash. And so, while sitting in a paper gown, she read the four basic profiles brought to her by the nurse. In the end, she went with the donor the nurse had initially suggested. "I didn't even buy the 25-page profile," Selena said. "I was just like, 'Just do it and if I get pregnant then I'll buy the 25-page profile, but if I don't, I'm done.'"

Selena did get pregnant. And, true to her word, she bought the donor's full profile and discovered that many of his answers really resonated with her. "I think it was just one of the ways that the universe felt like it was confirming that it was right and that there was a reason it didn't work out with the first one and that my kid was gonna be great," Selena said. "And he is."

To hear more about Selena's journey as a SMBC, including how she has discussed the donor with her child, check out the Pregnantish podcast produced by Pregnantish, a website dedicated to providing anyone dealing with infertility or fertility treatments with useful resources, support, advice, and community.

More Like This
Chrissy Teigen Says Her Pregnancy Cravings Are "Comical At This Point"
New Report Shows 80% Of Pregnancy-Related Deaths Are Preventable
Chrissy Teigen Says She’s Come To Understand She Had An Abortion To Save Her Life
Exclusive: Watch Hayden Panettiere Talk About Addiction Treatment 4 Months Postpartum