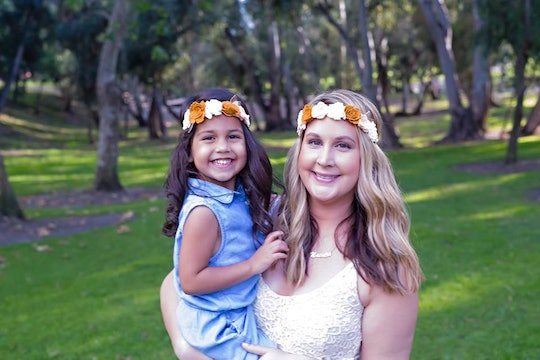 How Other Moms Feel When You Brag About Milestones

My daughter didn't walk until she was about 15 to 16 months old. I remember constantly hearing from friends and family, "Oh, she isn't walking yet?" Like it was some type of race for her to grow up. "No, she is standing and holding things, but she is getting there," I would tell them. You may not realize it when you post that adorable picture of your 10-month-old walking, but some kids don't develop as quickly as others. Some kids, like my daughter, are curious about everything going around them, and take their time to learn things.

In this world of everything digital and everyone posting their entire lives on social media, there is this pressure that is put on parents to have their kid hit a milestone first. "My kid is reading by the age of 4!" That's great for your kid! However, my daughter is five and cannot read. She is learning sight words and makes up random sentences when she pretends to read a book.

What some moms don't understand is that children learn at their own pace. There is no special age to hit milestones. All children walk and talk at different ages. And if your child is like mine and seems to not be as caught up as other children, then don't concern yourself with those children. Concentrate on how your child is progressing. And even if your child isn't progressing as fast as you would like, that's okay too, at least you are identifying a potential issue.

According to the Centers For Disease Control and Prevention website, "Children develop at their own pace, so it’s impossible to tell exactly when a child will learn a given skill."

Although knowing your child's progression toward hitting certain milestones is important, it is also important to trust yourself that as a parent, you know your child best. Your child will learn at their own pace and let you know when they're ready.

When my daughter would struggle to take steps while holding onto our couch and coffee table, I knew walking would not come fast and easy for her. I remember dropping her off at daycare and having another mom exclaim how well her daughter was walking. Meanwhile, my daughter was great at crawling and standing. I remember telling my daughter, "Show your teacher how you stand." I wanted to show that my daughter may be "slower" to learn, but she was trying.

It hurts because there is an expectation that your child is "normal" and doing what most babies are doing. It hurts when parents aren't aware of how other parents may be experiencing more trying times when it comes to their children hitting milestones.

Preemie babies are typically delayed when it comes to hitting milestones such as walking and talking.

As my daughter entered preschool, my husband and I realized that speech would also be a delayed milestone. She could talk but not with words that anyone but my husband and I could understand. To us, she was "normal." She was progressing how we felt was "best." But when her preschool teacher brought up her speech delay, we decided to enroll her in speech classes.

No one ever wants to admit that something is wrong with their child, so when I had to explain to people that my daughter was taking speech classes as a toddler, it was hard for others to understand. They thought that toddlers couldn't really talk to begin with, but what they didn't understand is that she was supposed to be understood by others. People could not understand her saying her name. Our friends and family couldn't understand that a speech issue could be determined at such a young age.

I scoured many baby groups about hitting milestones, especially speech. There were so many mothers desperately seeking guidance with their little one who was not eating solids by a certain age or grasping objects yet. And "expert" parents would comment about how their kid did this as this early age and maybe they should seek help from a doctor. FYI, that doesn't help. Bragging about how great your baby is does not help a parent who just wants to hear that their child will end up like any other child. And I'm sure most parents bring up any potential issues with their child's doctor.

Parents need support from other moms. My daughter was a preemie so I decided to join preemie parent groups and read articles based on premature babies. I learned that preemie babies are typically delayed when it comes to hitting milestones such as walking and talking. The support from other moms made me feel better, instead of hearing how their baby was doing everything at a "right" age.

And you know what? As time went on, my daughter learned to walk. Seeing her take her first few steps was a memory I will never forget. I will forget how worried I was about her not being an early achiever, I will always remember her actually doing it. And after almost a year of speech classes, my daughter "graduated" and no longer needed speech lessons. I was ecstatic and proud.

After debating with myself, I posted a picture of my daughter after her last speech evaluation saying how proud I was of her for completing her classes and her speech being caught up for her age, according to her speech therapist. From seeing other people post about how their child was speaking and reading at a typical age, I was reluctant about sharing that my daughter had a speech delay. But I received an overwhelmingly positive response and that made me feel like I was a good mother for identifying a problem with my daughter and finding a solution for it.

Before you post that video of your child walking at an early age, make sure not to make it so much about at what age it occurred at but instead make the post about how proud you are as a mom. For some moms, those bragging posts hurt more than you know because their kids are not quite there yet.