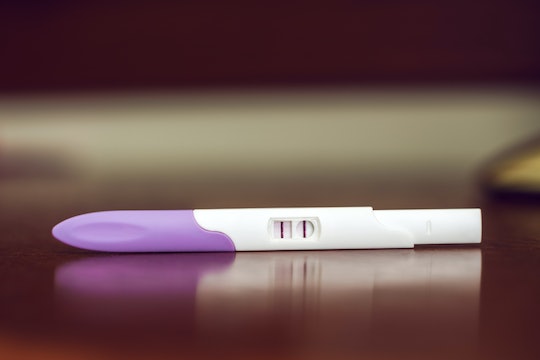 How Ovarian Cysts Can Impact Your Fertility, According To Science

It can be frustrating, not to mention heartbreaking, to hold a negative pregnancy test in your hands when you're trying to conceive. If you, like many people of childbearing age, have been diagnosed with ovarian cysts, are trying to start a family, and are experiencing a few challenges, it's normal to wonder if the two are linked. So, can you get pregnant with ovarian cysts? To answer this particular question, you need to know what type of cysts you have and what's causing them.

So, what is an ovarian cyst, anyway? According to the Office on Women's Health of the U.S. Department of Health and Human Services website, an ovarian cyst is a sac filled with fluid in or on an ovary. Ovarian cysts are pretty common, so if you have ovaries you probably have had one. Since they generally don't cause obvious and/or painful symptoms, however, most people don't even realize they're carrying a cyst on and/or around their ovaries. According to the aforementioned website, the most common types of ovarian cysts are called functional cysts, and are associated with hormonal fluctuations during your menstrual cycle. Other less common cysts incluced endometriomas, which are caused by endometriosis, dermoids, and cystadenomas.

According to the Mayo Clinic, whether or not your ovarian cysts can prevent you from getting pregnant totally depends on the type of cysts you have. The Mayo Clinic's site states that ovarian cysts caused by polycystic ovary syndrome (PCOS), a hormonal disorder which can impact ovulation, may lead to problems with fertility. Another type of cyst that can cause infertility are endometriomas which, again, are caused by endometriosis. Other cysts, including functional cysts (remember, these are the most common), cystadenomas, and dermoid cysts generally don't impact fertility, unless they get too large.

If you've been diagnosed with ovarian cysts caused by PCOS or endometriosis, you may be wondering if there's anything you can do to help things along in the pregnancy department. According to the American Congress of Obstetricians and Gynecologists (ACOG), there are treatments available for those who are trying to conceive. According to ACOG website, the main ways to help people with PCOS get pregnant are treatments to help them ovulate, including insulin-sensitizing drugs, weight loss, and medications to stimulate ovulation.

ACOG generally recommends treating endometriosis with medications, including mainly oral contraceptives, which is not really helpful when you're trying to get pregnant. ACOG does, however, state that surgery to treat endometriosis may help infertile patients conceive. As always, if you have been diagnosed with ovarian cysts, are trying to conceive, or have any questions about your future plans to start a family, you should consult your doctor about your best treatment options and any fertility issues you may be experiencing.

More Like This
My Queer Pregnancy Began In A Cold Doctor’s Office, But It Was Also Weirdly Romantic
Pelvic Pain During Pregnancy: What Causes It & How To Deal With It
What Is Acid Reflux Tape? Chrissy Teigen Swears By It
21 Imaginative Boy’s Names that Start with “I”