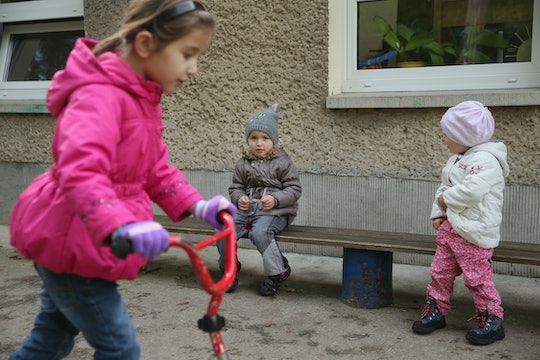 When I sit back and watch my daughter at her toddler playgroup, it's interesting to see her play in proximity to the other tots without actually playing with them. I must admit that sometimes this lack of interaction makes me doubt whether all of this scheduled social time is worth it. But, it turns out that parallel play affects a toddler's brain in all kinds of positive, yet somewhat unexpected, ways.

So, what exactly is parallel play and when does it start? Simply put, parallel play occurs when children play alongside other children without much interaction, according to the Child Development Institute (CDI). If your child is around the age of 2, you may have started to see signs of this play stage. "Parallel play is generally observed in toddlers between the ages of 24 and 42 months," explains Katie Davis, PsyD, a clinical neuropsychologist in New York City, to Romper.

In my daughter's case, she'll happily occupy herself with a wooden puzzle, while a boy next to her is completely transfixed with his toy train, and another kid is playing dress-up with a Frozen dress. It looks like a bunch of kids who could care less about each other, but, they are all gaining a lot from this adjacent play, according to Dr. Davis.

"Children model for one another, so they develop through observational learning: language skills, motor skills, and social/emotional skills. Parallel play also allows kids to maintain their ability to play alone," says Dr. Davis, who also is a researcher at Johns Hopkins University.

Interestingly, even when kids are not talking directly to one another, they are learning new words. "As your toddler sits and minds their own playing, they will also be listening and learning words from nearby children or adults. Sometimes they may peek and see a toy or an action being called a certain word. They’ll add [it] to their vocabulary and surprise you with it later," Healthline explained.

What's more, while it might look like your child is completely lost in his or her own world while parallel playing, they're actually keenly aware of their neighbors. "Even though it may appear that they don’t care about the presence of the other children, just try separating them and you will see this contact from afar is very important to them," according to CDI.

This type of play serves as a "bridge" from solitary play to more cooperative play, according to Dr. Davis. So, with parallel play being an important stage of play that leads to more interactive play, just how much is needed? If your child isn't getting regular exposure to parallel play in a child care environment, do you need to worry?

"If kids are not in preschool or daycare, parallel play doesn't necessarily need to be specifically encouraged, but parents should definitely create opportunities (both structured and unstructured) for kids to socialize with peers in order to allow various forms of play to occur naturally," explains Dr. Davis.

With that in mind, I'll definitely be signing my daughter up for another session with her toddler playgroup.