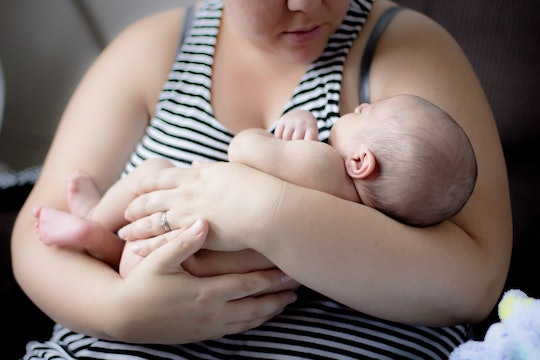 If you're a mom or thinking about motherhood, you've probably seen a lot of articles debating when is the best time to have kids. Although there's no ideal age to have a baby (everyone is different, right?), there are some distinct differences between younger moms and older moms, especially where it concerns mental health. According to a recent study, "The Association Between Maternal Age and Depression," older moms are more susceptible to depression than younger moms.

Muraca said of her findings, according to The Telegraph:

Anxiety during pregnancy has been found to be one of the strongest predictors of depression after childbirth.There is a lot of rhetoric talking about the biological risk, and that is really discomforting for women in that age group. We found that women [who have recently given birth] aged 40-44 have almost five times the odds of experiencing depression than women at younger age groups.

According to Muraca, older moms are more likely to suffer depression than younger moms because they tend to have less support in general, and they have fewer friends going through the same experience. Furthermore, Muraca believes older moms tend to be more anxious about their pregnancy than younger moms, and this anxiety tends to carry over into their parenting. According to the HuffPost, "having an anxiety disorder is the single most significant predictor that a person will develop depression."

This increased risk has been attributed to a variety of factors, such as the perception that older women have more difficult experiences and adjustments to motherhood, and the lack of peer support due to deviations from social norms surrounding maternal age.