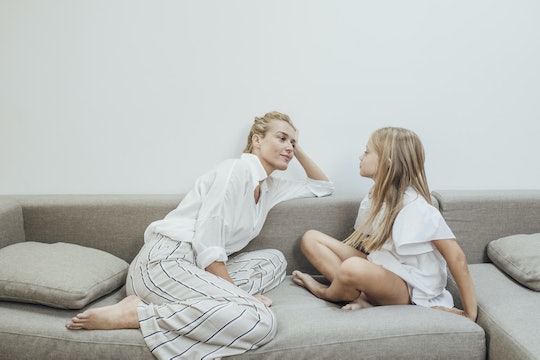 How Parents Can Help Kids Develop Longer & Healthier Relationships, According To New Research

Relationships of all types can be stressful, especially romantic ones. When embarking on a new romance, there are endless situations that can pop up and make people freeze, feeling as if nobody has prepared them for how to handle a fight or a particular moment. Luckily, new research has detailed how parents can help kids develop longer and healthier relationships.

In every relationship, understanding how to navigate conflict is key to its long-term health and sustainability. Pop culture loves to showcase couples in that dreaded first fight, but in reality, conflict can actually help improve your relationship. And when you think about it, it makes perfect sense. Think about non-romantic relationships and the conflicts that exist there. Sites like BuzzFeed have even featured the worst fights that siblings had and how they eventually got over it.

When people know how to communicate healthily, basic fights won't make or break their relationship, as proven by all the times people have gotten into tiffs with siblings that didn't end in total destruction. Instead, people are able to healthily explore what's bugging them, without having to let things fester. But how do people gain those skills? According to new research through Pennsylvania State University, published in the Journal of Youth and Adolescence, parents play a big role.

Mengya Xia, graduate student in human development and family studies at Penn State and researcher in the study, told Science Daily of the findings:

Adolescents from families that are less cohesive and more conflictual may be less likely to learn positive problem solving strategies or engage in family interaction affectionately. So, in their romantic relationships, they are also less likely to be affectionate and more likely to use destructive strategies when they encounter problems, like violence.

Now, that makes a good case for ditching harsh punishments, but what's the point in explaining decisions to kids?

In child development, a lot has been said about the importance of allowing kids to make their own decisions. According to Psychology Today, decision-making is one of the most important skills a child needs. Kids need to be able to stop and think, so decisions give them an opportunity to develop some critical thinking skills. Bad decisions allow them to grow from their mistakes, while good decisions set them on a path of positive reinforcement. But, sometimes, a decision can't be left up to a child, and that's fine. In that case, though, explaining to a kid why a decision was made is helpful.

For example, University of Rochester Medical Center writes that making corrections focused on learning is more beneficial for children than just yelling. "Don't just tell your child not to run around with food in his mouth. Explain why this rule is important. Tell him that it isn't safe because he could choke, and that your job is to help him keep from getting hurt," according to the University of Rochester Medical Center.

Forming the skills necessary for relationships starts at home, because the family is where people are introduced to conflict and communication. As Xia told Science Daily:

The family relationship is the first intimate relationship of your life, and you apply what you learn to later relationships. It's also where you may learn how to constructively communicate — or perhaps the inverse, to yell and scream — when you have a disagreement.

For the study, researchers recruited 974 adolescents and surveyed them at three points in time between sixth and ninth grade. During those times, Science Daily reported that participants were asked about their family climate, parents' discipline strategies, how assertive they were, and if they had positive interactions with their parents. Only when they reached young adulthood — at the average age of 19.5 — did the researches ask them about romantic relationships.

Not only did researchers discover correlations between parenting and healthy relationships, but they found that those who noted positive engagement with their parents during adolescence reported feeling more love and connection in their relationships later in life.

This study is important, because not only does it help highlight the role of the family, but it gives people concrete examples they can take into life moving forward. Every family looks different, some of them are chosen, some of them are spread far apart, and some are mixed together, but the principles of treating kids kindly and explaining decisions to them can be utilized by anybody.