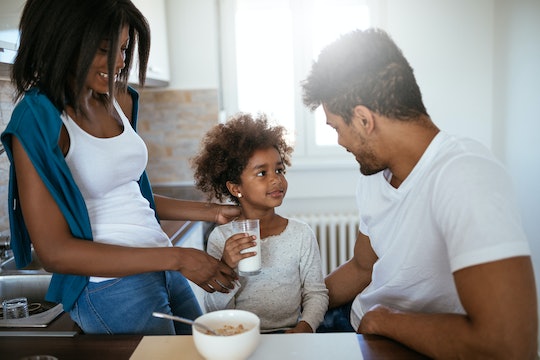 How Parents Can Help Their Kids Become Healthy Eaters, According To New Research

Toddlers are some of the world's best mimics, capable of copying just about anything — even the things you're unaware of doing. There's a lot of focus, now, on how parents can encourage healthy eating with their kids. And, according to a new study, parents' behavior could help their kids become healthy eaters.

Now, healthy eating isn't solely about limiting the food you eat and putting restrictions on your child's diet. For example, as outlined in the Chicago Tribune, banning things like soda and sugary food isn't actually the best strategy for kids. As Dina Rose breaks down in her book It's Not About the Broccoli, many parents "focus too intently on the nutrients or amount of sugar their kids consume daily, rather than looking at the long view of teaching their children to eat a variety of foods in moderation", according to the Chicago Tribune. "The more that parents focus on nutrition, the worse their kids are likely to eat," Rose explains in her book, according to The Washington Post.

Essentially, restricting food doesn't teach your kids how to have a healthy relationship with not just sweets, but food in general. Instead, food becomes a battleground, and an aspect of life they have no control over.

So, what can parents do to avoid food breakdowns?

A new Penn State study, as reported by the Deacon Chronicle, has examined the relationship between parents' behavior and their children's eating habits. A big part of healthy eating is being able to know when you've had enough. Or, in other words, the ability to self-regulate.

Self-regulation can be understood in two basic parts, as noted by Psychology Today. First, from a behavioral viewpoint, it refers to someone's ability to act in their long-term best interest, consistent with their deepest values, according to Psychology Today. Emotionally, it refers to someone's ability to calm themselves when angry and cheer themselves up when they're upset, as explained by the publication. Above all, self-regulation is a skill, which means it's something that needs to be developed over time.

For this recent study, according to Science Daily, researchers found that toddlers with poor self-regulation skills went on to have lower BMIs as preschoolers if their mothers played with them and encouraged them during clean up. (BMI stands for body mass index and is a way to start determining what a healthy weight is for an individual. For children, it also helps doctors keep track of what's average for other children in a similar age group and height.)

But, what's the link?

Cynthia Stifter, professor of human development and psychology at Penn State, explained, according to Science Daily:

If parents can help their kids learn to self-regulate, that child can then use those skills in many other situations, including eating. Good self-regulation may help a child stop themselves from throwing a tantrum, but it may also keep them from eating too much. Building those skills is a process that isn't going to develop on its own, so that's where parents can step in.

For the study, researchers worked with 108 mothers and their 18-month-old toddlers, as Science Daily outlined. They were allowed to free play for five minutes before researchers signaled it was time to clean up. As Science Daily noted, researchers kept track of how "responsive" the mothers were during free play (defined as following the child's lead during play) and how often the mother guided clean up in a positive or neutral tone.

Then, when the children were 4.5 years old, they were weighed again. Researchers found that when mothers were more responsive during play and showed gentle control during clean up, their children were more likely to have a lower BMI at 4.5 years of age if that child also had low self-regulation skills at the beginning of the study, according to Science Daily.

Essentially, playing with kids and encouraging them to clean in a "gentle" way helps kids learn to regulate themselves. They played, according to how they wanted to play, but were also taught how to appropriately handle when playtime ends. That's an important skill to have when it comes to food, such as learning how much to eat and when you've had enough. As Stifter explained to Science Daily:

It's understandable that parents can't always be positive and gentle when controlling situations... But in situations where you can, this study implies that this way of parenting will teach the child a skill that they can apply in many situations, including waiting to eat or eating a less desirable food.

Researchers have previously looked into the role self-regulation plays in childhood eating habits. In 2017, as outlined by another study's abstract, researchers determined child eating self-regulation was a result of gene-environment interactions. That means some things, like cognitive ability, are inherited, while others are a result of their feeding environment. All of these are important, though, when discussing eating habits and the ability to self-regulate.

"Identifying the genes and environmental influences contributing to these will help us tailor our parental feeding advice to the unique nature of the child. In this way, we will devise more effective advice for preventing childhood obesity," researchers wrote, according to the National Institute of Health's 2017 study.

Hopefully, this study helps lead to changes in how society addresses food. But for now, it points to a good way parents can start laying the groundwork for those good food relationships.