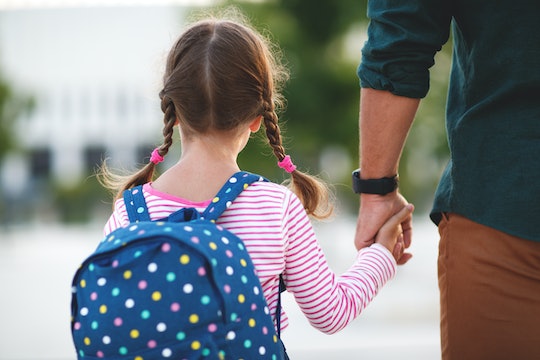 Here's How Parents Can Best Help Their Kids Overcome Adversity, According To Research

Stressful life circumstances can create lifelong consequences for children, a sentiment that's backed up by years of scientific research. And given the potential ramifications of trauma, it's important that parents help their kids overcome difficult events as they arise. Although some might argue that this is easier said than done, a new study has outlined the best tips for parents who want to help their kids overcome stress and thrive in school.

A study published in the medical journal Pediatrics Monday found that one simple action can go an incredibly long way towards offsetting childhood setbacks and challenging incidents. Although it might seem like a given to some, lending a sympathetic ear to your offspring can help them thrive as an individual. And as the study noted, a parent's ability to be kind, caring, and a good listener is directly tied to a child's likelihood to overcome problems and do well in school, even if there has been trouble at school or home in the past, according to Medical Xpress.

So, how were the findings determined? Lead researcher Angelica Robles, M.D., a pediatrician at Novant Health Developmental-Behavioral Pediatrics in Charlotte, North Carolina led a team that tapped into data drawn from a 2011-2012 survey of over 65,000 U.S. children, ages 6 to 17, according to U.S. News & World Report. Specifically, Robles' team zeroed in on the aftermath of a difficult event in a child's life, whether it was domestic or community violence, economic hardship, addiction or mental illness in the home, the death or incarceration of a parent, or a family divorce, according to Pediatrics.

Unsurprisingly, researchers found that adversities can affect a child's interest in school, with some kids ignoring grades and homework depending on the intensity of the difficulties. Minors who had four or more adverse events in their lives, for example, are nearly three times more likely to repeat a grade, according to WebMD.

In fact, the researchers noted that a compassionate parent was a greater factor in a kid's academic performance than whether they eat together as a family or live in a safe, clean neighborhood, according to WebMD. Additionally, a caring parent increased a child's likelihood of completing homework and being engaged in school sixfold, and about doubled the likelihood of a student not having to repeat a grade.

Of course, there are plenty of other factors that can help keep kids healthy, happy, and engaged academically. In an editorial that accompanied the study, Rebecca Dudovitz, M.D., at UCLA's David Geffen School of Medicine, noted that having five or more family meals a week together, living near amenities like parks and community centers, and having supportive relationships with teachers or coaches, can all play a role.

"Kids are constantly paying attention to adults in their lives, even teenagers who don't seem to care at all about what we have to say," she said, according to WebMD. "They really are watching us and want to be seen as whole individuals."

All of this research goes to show just how powerful the job of a parent can be. And while it's not always easy to be present (juggling multiple jobs and personal issues are some possible roadblocks), it's important for parents to lend a sympathetic ear because listening can do wonders for a child's future.